President-elect Donald Trump speaks during a rally at the Giant Center, on Dec. 15, 2016, in Hershey, Pa.
Matt Rourke—AP
Ideas
By Karl Vick
Karl Vick is an Editor at Large based in New York. From 2010 to the autumn of 2014 he was the Jerusalem Bureau Chief, covering Israel and the occupied Palestinian territories with occasional forays into other lands.

Don’t even try thinking of Donald Trump’s choice for ambassador to Israel as a diplomat. David M. Friedman is far from that. But he serves very well as a reply in kind, an answer in human form.

It’s like this: For the last three years Prime Minister Benjamin Netanyahu, the man who leads Israel, has sent signal after signal that he’s done with peace talks, or ever pulling Israeli troops out of the West Bank. Sometimes these signals were verbal—in the 2015 election campaign, Netanyahu declared flat out that there would be no Palestinian state. More recently the signals arrived in the form of diplomats—men who, like Friedman, had no prior experience in the subtle arts of statecraft, but whose biographies and attitudes said a great deal. In August, Dani Dayan became Israel’s Consul General in New York. To get his stuff, the moving van had to leave Israel and drive across the Green Line into Palestinian territory, where Dayan lived. He is a settler, a Jewish Israeli who moved to the West Bank in order to stake a claim to rocky hills that are also home to some two million Palestinians. In fact, for six years, Dayan headed the settlers’ primary organization, the Yesha Council. Earlier in the year, Brazil rejected his appointment as Israel’s ambassador to Brasilia, citing his settler background.

In New York, Dayan joined a man with a similar name—Danny Danon, the new Israeli ambassador to the United Nations. Danon was Netanyahu’s remarkable choice for the international body where the topic of Israel’s 50-year occupation of Palestinian territory is a chronic one. The new ambassador had written wrote a book suggesting that Israel simply annex the West Bank, perhaps leaving the Palestinians some urban areas. His rhetoric is famously scalding; after Israeli Defense Forces commandos killed nine Turks on a relief boat headed to the Gaza Strip, Danon wrote to Turkey’s prime minister saying “We are sorry that due to the IDF’s over-cautious behavior, only nine terrorists were killed…” Danon’s appointment to Israel’s premiere diplomatic post— like Dayan’s as envoy to the largest concentration of American Jews—was as far as you can get from business as usual in Israeli diplomacy. For more than a generation, it at least nodded to the idea of a Palestinian state. That’s no longer the case. Not even from the next U.S. ambassador—a bankruptcy lawyer who has represented Trump’s casinos.

“There has never been a two-state solution,” Friedman wrote in August, “only a two-state narrative.” And if it was that was a narrative in which moderate Palestinians invested pretty much everything, a story in which almost the entire world continues to believe, the crystalline signal from both Trump Tower and Jerusalem is that it’s all over now. The President-elect has clarified his position. Gone is the talk of brokering peace in the biggest deal ever, proving his bona fides as a dealmaker by being “sort of a neutral guy” or “honest broker,” as Trump himself put it in the campaign. With Friedman, he has cast his lot with Israel’s expansionist right-wingers, whose impulses decades of U.S. policy has tried to control, or at least balance, not least in order to keep hope alive among a Palestinian population sinking deeper and deeper into despair.

What’s the way forward now? Is there an alternative narrative after the two-state solution? One other way to look at Trump’s fateful appointment is not just as a reply, but as an action. Trump’s choice fits Netanyahu’s like a lock fits a key. Who knows what’s in the box they open? 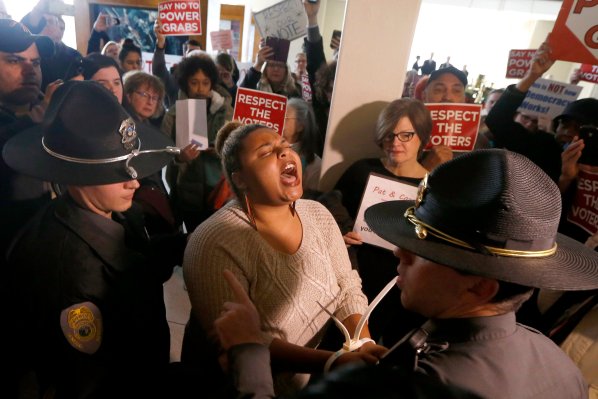