Parents Don't Get How Negative They Seem to Their Teenagers

Raising teenagers is one of the most challenging aspects of parenthood. During those tumultuous years, adolescents crave independence, and when their parents tell them what to do, they often snap back against displays of authority by yelling, slamming doors, and stomping off to their bedrooms. Most parents are familiar with these communication impasses but have no idea how to handle these meltdowns.

Yet, there is hope; new research conducted at the University of California, Riverside may offer parents new insights about how misunderstandings at home affect teens’ problem behaviors. The study also provides some advice on how parents can manage these conflicts.

The study, published November 15 in the Journal of Youth and Adolescence, reviewed data from 220 parents and their teens. The researchers discovered that when teens thought their parents’ reactions to their anger was stronger and more negative than their parents had meant it to be, they became even more aggressive. For example, these parents were more likely to respond to their children’s anger by telling them to “get over it,” which caused their kids to feel dismissed and neglected.

The researchers also found that parents who mistake their adolescent’s vulnerable emotions for negativity may place them at greater risk for developing delinquent behaviors. Moreover, when teenagers believed that their parent’s method of discipline was too harsh, they were more likely to act out by talking back, sneaking out of the house, and breaking the family rules.

Interestingly, there was a clear gender separation in the study results. For example, when mothers misinterpret their teenager’s anger and react negatively, their adolescents are more likely to act out their feelings by arguing, storming off, and shutting down. However, when father’s misread their children’s anger, the teens are more likely to become aggressive.

“The relationship between fathers and teens is understudied compared to mothers, but our findings show that the father-teen relationship is unique,” says Misaki Natsuaki, one of the researchers in the study and an associate professor in Psychology at the University of California, Riverside. “The way fathers respond to their teens’ negative emotions has the potential to exacerbate or hinder teens’ aggressive behavior.”

As a psychologist, I believe several factors are at play. During adolescence, hormones surge through teens’ bodies, causing emotions that feel larger than life.To top it all off, they often believe that no one except their peers can understand or help them. As a result of this angst, when teens feel misunderstood by their parents, they’re more likely to try to assert their power by becoming aggressive. In reality, though, they’re trying to be heard.

During this same time, parents are dealing with their own angst and transitions, because let’s face it; the teen years aren’t the most rewarding part of parenthood. As a matter of fact, recent research even links the tween and teen years to maternal depression. As teenagers try to establish a sense of autonomy, parents may feel rejected and react negatively when their kids push boundaries. The adolescence study found that parents view themselves as warmer and more supportive than they actually are, which may be why they often underestimate how their words come across to their teens.

While parent and child conflict is a regular part of any family dynamic, the latest findings suggest that parents can strengthen their relationships with their teens by inviting them to share their perspectives regarding their parents’ decisions.

“When teens withdraw and shut down, it’s important for parents to clarify what their son or daughter heard and to discuss any differences in their views about parenting,” said Natsuaki.

She says that it’s important for parents to remember that while teens may be moody and fickle, they are actually able to see different points of view. Unlike younger children who are more egocentric, teens are capable of engaging in more complex thinking.

Parents may feel reassured to know that even when disagreements arise, adolescents tend to respond to this type of logical reasoning, despite all evidence to the contrary. Natsuaki says that frank discussion about perceptual differences between the kids and their families may help parents and children gain insights about each other that can bring them closer together.

“When parents invite their teens to share their perspectives, they help them strengthen their reasoning skills, and this is correlated with psychological health and happiness later in life.” 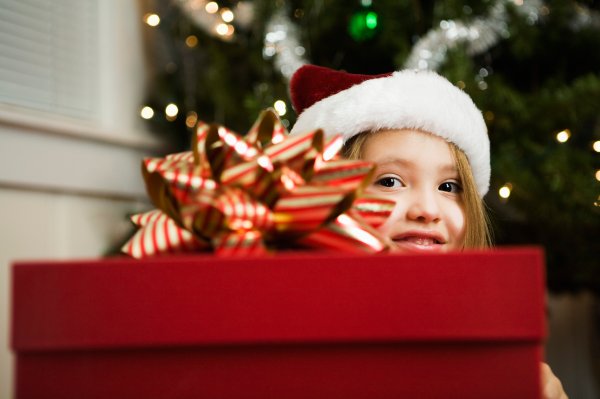 12 Gift Ideas That Should Be on Every Parent's List
Next Up: Editor's Pick