Over a series of in-depth conversations, three-time Formula One champ Lewis Hamilton talked to TIME about the U.S. presidential election, the Black Lives Matter movement, and the controversial end of this year’s FI season.

You can read the complete profile of Hamilton, featured in the latest “Year Ahead” issue of TIME, here. Below, some excerpts from Hamilton’s interviews with TIME:

Hamilton followed the race closely, and watched all three debates. “I could not switch the news channel to watch something else,” says Hamilton. “That’s never, ever happened to me.” He’s not a fan of Donald Trump, though Hamilton hopes Trump proves his critics wrong and becomes a capable president. “It’s such a huge contrast,” says Hamilton, “when you’re a politician like Barack Obama, who’s a really good family guy, he never groped a women, or said anything derogatory about women. He’s someone I can personally look up to. If I had a kid, I could be comfortable that my kid is going to look at that guy and benefit. I can’t say that would be the case with Trump.”

Hamilton waded into the charged debate over race and police violence this summer, posting on Instagram a picture of a white man and black man standing together, each holding a sign with an arrow pointed at the other. “Is His Life Worth Less Than Mine?” the white man’s sign read. “Is His Life Worth More Than Mine,” read the black man’s. Hamilton added two hashtags: #blacklivesmatter and #alllivesmatter.

Even this anodyne call for unity sparked dissent. “Some white people were angry,” says Hamilton. “Some black people were angry. Of course, the issue is there are these cops that happen to be killing black people. But it’s all lives matter. To the millions that follow me, I’m trying to be careful. I don’t want to segregate myself away from other ethnicities. I feel equal to Mexicans, Asians, everyone. That’s the kind of positive message I want to get out.”

Compared to his native UK, the ease with which Americans can acquire guns both baffles and worries him. “In Colorado, I can go into the Sports Authority and in the back, they’ve got gun,” says Hamilton, who lives part of the year in that state. “I can buy bullets, even though I’m not an American citizen. That’s just crazy … I hope in 10, 20 years time, someone in America can shed that.”

The Controversial End to the F1 Season

Hamilton suffered three engine failures in 2016. During the last race of the year, in Abu Dhabi in November, the front-­running Hamilton defied orders from his Mercedes team, slowing the pace to let other cars catch up to Rosberg in the hopes they would knock him to fourth place––and allow Hamilton to win the championship. Rosberg salvaged second, and the title. Toto Wolff, the Mercedes team boss, equated Hamilton’s defiance to “anarchy.”

Hamilton has no regrets. “The team’s job is to provide both drivers with equal opportunity,” he says. “And unfortunately, I didn’t have equal opportunity, because I had failures on our side of the garage. The other side didn’t. So that puts more stress on the importance of myself sucking every ounce of opportunity. At the end, that’s all I could have done. I didn’t do anything dangerous. I didn’t put anyone in harm’s way. I’d do it again. You’re out there to fight.”

His Relationship with Nico Rosberg

“We started racing together when we were younger,” says Hamilton. “It’s kind of cool, but s–t, when you get beat by the guy, you’re going to get emotional about it … I look at it that I didn’t do a good enough job. It’s a motivator. I’ve got to get my s–t together. He did a better job today.”

Who He Wants as His Next Teammate

With Rosberg retiring, Mercedes is looking for a driver to replace him. Does Hamilton have any preferences? He’s not naming names, but he has a certain type of person in mind. “Me and Nico, who were for sure better pairing than most of the others that would come, we had our little problems,” says Hamilton. “So we have to make sure that, whoever they bring to the team, it’s someone who can create harmony. Because that’s only a positive for the team.”

Wolff had said that Mercedes would consider Fernando Alonso, the two-time champ who clashed with Hamilton in 2007, Hamilton’s rookie year, when they both raced for McLaren. “I mean, I have no problems racing against Alonso,” says Hamilton. “I already did that in my first year, beating him in my first year as a rookie. I’m happy to race against anyone. However, as a team player, he’s not at the top of the list in terms as someone who would be best for the team.”

Alonso recently said his “only goal” is to win a world championship with McLaren.

How He Measures Success

Though Hamilton struggled at times this year, he ended the 2016 season with four straight wins. He hopes this run carries into next year — the F1 season starts in March, in Melbourne. “Through all these experiences, I’ve grown a lot as a driver,” says Hamilton. “I finished the season the most complete I’ve perhaps ever been. I think that’s a great positive to end on. Even though I didn’t win the championship, I felt like I succeeded.” 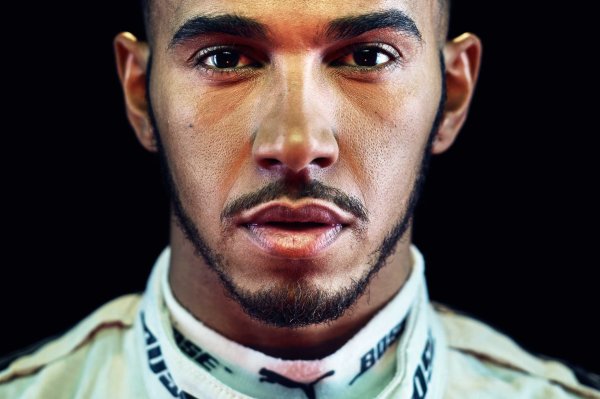 The Fastest Man on Wheels
Next Up: Editor's Pick