Congo's President Is Refusing to Step Down, Raising Fears of Bloodshed

Congolese President Joseph Kabila sits during a special joint session of parliament in Kinshasa on Nov. 15, 2016, the day after Prime Minister Augustin Matata resigned to make way for an opposition figure in line with a controversial deal that effectively extended the president's term in office.
Junior Kannah—AFP/Getty Images
By Aryn Baker

There are many ways for political leaders to cling to power after the end of their term. They can rig elections, push through constitutional amendments, call in the army or put a referendum to the people. Or, as in the case of the Democratic Republic of Congo, there is the option of doing absolutely nothing at all.

Despite the fact that Joseph Kabila’s second and final term as president was due to end in December, his government failed to prepare by holding presidential polls in time. With no elected successor in place, Kabila says he has no choice but to keep leading the country. His opponents and, according to a recent opinion poll, nearly 80% of the population say that nonetheless he must announce his resignation. Only around 8% said they would support him if he ran again. On Monday Dec. 19, the last day of Kabila’s term and the day he is supposed to step down, Congo will demonstrate whether or not the latest gambit in the strongman’s playbook works.

Opposition leaders have called for daily demonstrations from the 19th until he relinquishes power. Kabila’s government has said it will not tolerate political protests, and has temporarily blocked several radio stations. Authorities have ordered telecom providers to cut access to social media services, including WhatsApp, Twitter, Skype and Facebook, starting at midnight the night before planned demonstrations. The order could slow the organization of public protests, but it could also have the opposite effect, driving people to the streets to get information, as happened when the Egyptian government of Hosni Mubarak cut communications at the onset of the Tahrir Square uprising, ultimately leading to his downfall.

The United Nations and international observers are warning that if Kabila doesn’t step down, and protests go as planned, violence is all but certain. In September, over fifty were killed and scores wounded when anti-government protestors clashed with security forces. If the confrontations escalate, they could plunge Congo back into the chaos that took millions of lives when Kabila’s father, Laurent-Désiré Kabila, took power in 1997. The resulting civil war lasted for more than five years, pulling in nine neighboring nations in what has often been referred to as “Africa’s world war.” Many of the 20 armed groups from the conflict are still active today, and the UN has 20,000 armed personnel in the country to keep the shaky peace. It wouldn’t take much to open old wounds. Prolonged conflict could also bring Congo’s economy to its knees, just as it is benefiting from a booming mining sector producing some 40% of the world’s cobalt, an essential mineral for the batteries in electric cars, computers and cellphones.

In October, the country’s electoral body announced that the elections could not be held before the end of Kabila’s term due to the fact that millions of new voters had not yet been registered. Instead, they postponed the polls until at least April 2018. Meanwhile, the country’s constitutional court issued a controversial ruling that the President could stay on until the next election, effectively extending his rule by more than a year.

The Congolese call it glissement, or slippage, and opposition leaders worry that the extra time in office gives Kabila, who has been in power since 2001, the opportunity to push through a constitutional amendment allowing him a third presidential term.

The Roman Catholic Church, one of the strongest non-government institutions in Congo, is mediating last-ditch negotiations for a power-transition agreement in an attempt to stave off protests. The opposition is demanding that the elections take place before the end of 2017, and they want assurances that Kabila will make no attempts to extend his rule beyond that.

The opposition also want charges dropped against exiled opposition leader and former governor Moise Katumbi, who in June was convicted in absentia of illegally selling a house that did not belong to him and sentenced to three years in prison. The charges, say Katumbi supporters, are politically motivated. Katumbi, a wealthy businessman, is president of Congo’s most successful football team, TP Mazembe.

“The charges are a joke,” says Francois Hurstel, a France-based political consultant who has worked extensively in the Democratic Republic of Congo and for Katumbi. “Why would a wealthy businessman, the governor of the province, steal a house? It is all a political ploy.” A month after Katumbi’s sentencing the judge in that case said she had been pressured by the intelligence services to convict him. She too has fled the country, saying that her life is now under threat. Congo’s intelligence services deny the allegations.

For months Katumbi has hinted that he might defy the charges and return to Congo to lead the opposition; on Dec. 7 he told the Financial Times that he would arrive before the 19th if the talks collapsed. “I’m going to be on the side of the people. This country doesn’t belong to one person.” Now, with just days to go, he appears to be waiting to see what happens with the negotiations. If he returns and is arrested, says Hurstel, it could cause clashes between his supporters and the government, sparking the kind of bloodshed that Katumbi is trying to avoid through negotiations. “He refuses to incite violence. He wants a peaceful solution. He is afraid of what would happen on the streets if he were arrested.”

There is still time to stave off the inevitable clash, says Sasha Lezhnev, Associate Director of Policy at the Enough Project, a Washington D.C. based advocacy group working to end genocide and crimes against humanity in Congo and Central Africa. “There is definitely still a window for the Kabila government to make this a successful transition that would generate some actual democratic change in Congo.” No one is really expecting Kabila to agree to step down Monday, but if he announces instead that elections will be held before the end of 2017, and that he won’t be running, it will go a long way towards calming tensions, says Lezhnev. For the opposition, it could be enough.

The bigger question is how much Kabila is willing to gamble on his anti-protest measures. If his attacks on news outlets, his expulsion of human rights groups and his quashing of social media networks work, he may not have to bring out the tanks, the guns and the teargas. But if people come out anyway, he will no longer have the option of doing nothing. He will be forced to choose between announcing his departure and shedding the blood of his people. 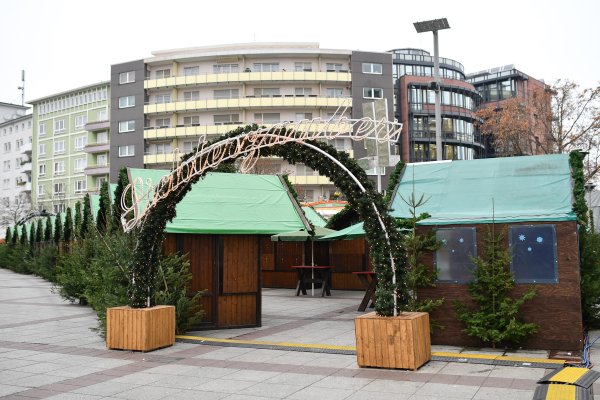 Boy, 12, in Plot to Bomb Christmas Market in Germany
Next Up: Editor's Pick