A cease-fire plan that would have allowed rebel fighters and civilians to exit the Syrian city of Aleppo collapsed less than a day after it was announced, as pro-government forces renewed airstrikes and artillery shelling on Wednesday.

The attacks suggest a resumption of the four-year-long battle for Aleppo, just when it appeared that its conclusion had finally arrived. The unraveling of the evacuation deal also raises the possibility that forces loyal to Syrian President Bashar Assad could capture the remaining rebel-held neighborhoods of Aleppo by force, potentially imperiling the lives of tens of thousands of people. The shelling also comes a day after the U.N. human-rights office said it had credible evidence that pro-Assad forces had entered homes and shot civilians on sight.

“The massacres will start again and all the people in the city will get killed,” says Monther Ataki, an opposition activist in the rebel-held section of Aleppo, in a voice message to journalists on Wednesday morning.

The announcement of the plan to evacuate rebels from the city had signaled what might still be the Assad regime’s most important victory in five years of conflict in Syria. Aleppo was Syria’s most populous city prior to the 2011 uprising that triggered the current war. Much of what was once an ancient and thriving city has now been shattered by years of fighting since rebels seized part of it in 2012. For years, Aleppo was an icon of the Syrian rebels’ struggle against the regime and a symbol of the Syrian people’s agony.

Syrian pro-government forces walk in the ancient Umayyad mosque in Aleppo after they captured the area on Dec. 13, 2016.
George Ourfalian—AFP/Getty Images

Russia and rebel groups announced the cease-fire deal on Tuesday evening following negotiations supported by Turkey, a key state backer of the opposition to Assad. The first evacuations were expected to begin early Wednesday morning. Buses stood idle at a rendezvous point on the edge of the besieged rebel enclave, but returned empty later on Wednesday morning, according to the Associated Press. The Russian Defense Ministry blamed rebel groups for breaking the cease-fire, claiming the opposition resumed “hostilities” at dawn.

Opposition activists suggested differences among the Assad regime’s allies were to blame for the collapse of the cease-fire deal. The Russian military, along with Iraqi militias, Iranian forces and Lebanese Hizballah militants, have all been instrumental in supporting Assad’s push to retake Aleppo. Rebel officials blamed Iran specifically for allegedly rejecting the evacuation deal. “We need that push on the Iranians and the Russians. The Syrian regime has not any finger in this deal,” said Ataki, the activist in Aleppo.

In the besieged neighborhoods, people expressed fear and bewilderment at the dramatic reversal of events on Wednesday. The day began before dawn, when residents left their homes and shelters, believing they were headed to a convoy of buses that would take them to safety. By daybreak, it became clear that the deal was not proceeding as planned. Then the shelling started again. In text messages, many continued to send calls for relief or safe exit. “People are dying in the streets,” said one resident, who called his messages, “our last scream from last free neighborhoods in Aleppo.”

Whether a truce is reinstated or not, Assad’s victory in Aleppo now seems assured. Since Nov. 28, forces supporting him have seized almost the entirety of the city’s besieged rebel sector, forcing the opposition to retreat to a handful of neighborhoods in one corner of the city. An estimated 50,000 civilians also remain trapped in the rebel pocket. Many fear arrest, torture or disappearance at the hand of the security forces if they flee to parts of the city controlled by the regime. Hundreds of men have gone missing after fleeing to government-held areas in recent weeks, according to the U.N. As a result, opposition officials have demanded safe passage for civilians to another rebel-held area as a condition of any surrender.

The failed truce deal followed some of the worst violence in more than four years of war in Aleppo. The U.N. expressed alarm on Tuesday after receiving reports that pro-government forces had shot civilians on sight as they swept into opposition-controlled neighborhoods, killing at least 82 people including 11 women and 13 children. U.N. spokesperson Jens Laerke said the situation in the city represented a “complete meltdown of humanity.” 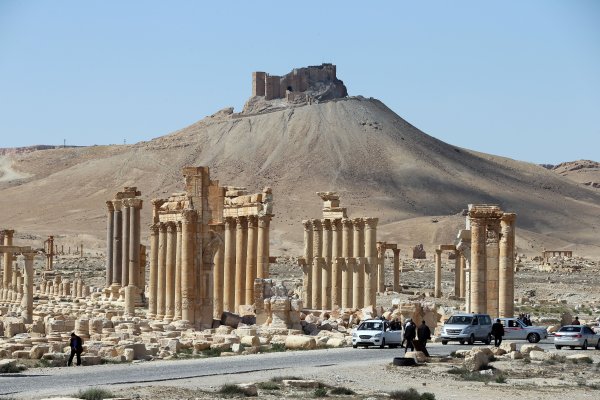 The Loss of Palmyra Exposes Syria's Weakness, and ISIS's Bloody Persistence
Next Up: Editor's Pick