The World's Newest Muslim Insurgency Is Being Waged in Burma

In this photograph taken on Oct. 12, 2016, heavily armed Burmese soldiers patrol Maungdaw, in Burma's Rakhine state. Terrified residents fled northern Burma on Oct. 14, thousands evacuating on foot and others airlifted out by helicopter, as troops hunted through torched villages for those behind attacks on police that have raised fears Rakhine state could again be torn apart
STR—AFP/Getty Images
Ideas
By Tim Johnston and Anagha Neelakantan / International Crisis Group

International Crisis Group interviews with several members of the armed group that carried out attacks against government forces in October and November, as well as other sources, have revealed important new details about the situation in western Burma.

The group refers to itself as Harakah al-Yaqin, or Faith Movement in Arabic. It was established following the 2012 deadly riots between Buddhists and Muslims in 2012, which killed some 200 people and displaced over 120,000, almost all of them Muslim. Most have long been denied citizenship and face draconian restrictions on freedom of movement — limiting their access to government services and jobs.

This new armed group is overseen by a committee of Rohingya émigrés based in Mecca. The public face of its operations in northern Arakan, also called Rakhine, is Ata Ullah (known by several aliases), who is the main speaker in several videos released by the group. He was born in Karachi to a Rohingya father and grew up in Mecca. He is part of a group of 20 Rohingya who have international experience in modern guerrilla warfare and are leading operations on the ground in northern Arakan. Also with them is a senior Islamic scholar, Ziabur Rahman, a Saudi-educated Rohingya mufti with the authority to issue fatwas.

To enhance its religious legitimacy further, al-Yaqin has obtained fatwas from senior clerics in Saudi Arabia, United Arab Emirates, Pakistan and elsewhere, giving backing to its cause under Islamic law. This has helped the group gain significant support among Rohingya in northern Arakan. It has spent at least two years training hundreds of local recruits in guerilla warfare and explosives. Several hundred Rohingya refugees in Bangladesh have also traveled to Arakan in recent weeks to join up. The current heavy-handed security response is very unlikely to dislodge al-Yaqin; rather, it is creating further despair and animosity among the population, which may further entrench violence.

The emergence of this well-organized and apparently well-funded group is a game-changer in the government’s efforts to address the complex challenges of Arakan state. Though there have been some small insurgent groups in recent decades, mostly based out of Bangladesh, in Burma — which is officially called Myanmar — the Rohingya have never been a radicalized population, and the majority have eschewed violence, seeing it as counterproductive to improving their lot. But impoverished and oppressed, they struggle to survive and have little hope for their future; over the past year, the sense of desperation has been increasing. The fact that more people in northern Arakan are now embracing violence reflects deep policy failures over many years, rather than any sort of inevitability.

Importantly, although there are some indications of training and solidarity links with international jihadist organizations, the aims and actions of al-Yaqin involve insurgency against security forces, rather than being terrorist or transnational jihadist. It has not attacked civilians or religious targets. Its stated aim is to secure the rights of the Rohingya as citizens within Burma — although its violent approach has set back that cause immensely.

Its tactics are sophisticated. On Oct. 9, it launched predawn attacks on three border police bases, including an audacious assault on the headquarters, a key security installation. The headquarters was overrun in a complex attack involving several hundred assailants that included planting improvised explosive devices and setting an ambush on the approach road, delaying the arrival of army reinforcements, while the attackers looted the armory. A further clash on Nov. 12 killed a senior army officer. These actions represent the actions of a determined, well-trained insurgency that will likely launch further attacks.

The military responded with a major operation to recover the looted weapons and capture those involved. Feeling its dignity affronted and taking casualties, the military employed disproportionate force and failed to adequately distinguish attackers from civilians. At least 1,500 homes have been burned down — almost certainly by the military, according to satellite analysis released by Human Rights Watch on Dec. 13. Some 30,000 have been internally displaced and 27,000 have so far sought refuge in Bangladesh. The area where the military is focusing its crackdown has been almost entirely sealed off, which has made it difficult to verify multiple allegations of serious human-rights abuses; but as more people arrive in Bangladesh, a clearer picture is starting to emerge.

Aung San Suu Kyi has said little publicly on the situation, has not traveled to the area or criticized the crackdown. The state media she controls have issued blanket denials of abuses, risking reinforcing the impunity of troops on the ground. Tensions with the Muslim world — including Malaysia and Bangladesh — are rising.

There are real risks that if the government mishandles the situation, for instance with the further use of excessive force, it will push more of the Muslim population in that area to support al-Yaqin, entrenching the armed group and a cycle of violence. It may also create conditions for radicalization that could be exploited by transnational jihadists to pursue their own agendas in Burma. A terrorist incident would inflame religious tensions across the country, with potentially disastrous consequences.

These dangerous outcomes can be avoided, but only if the security response is subordinated and integrated into a well-crafted political strategy that offers hope to the Rohingya, is sensitive to the deeply-felt grievances of Buddhist Arakanese, and prioritizes closer cooperation and intelligence sharing with countries in the region. The political space for such initiatives has now shrunk. Strong, public leadership is required from Aung San Suu Kyi to prevent the situation deteriorating. 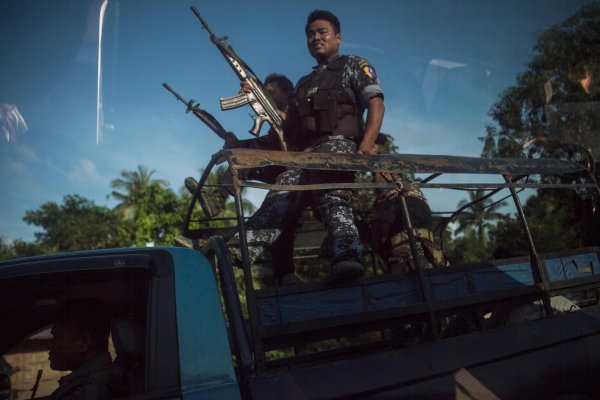