Democratic and Republican Senators are preparing to turn the confirmation process for President-elect Donald Trump’s pick for Secretary of State into a platform for debating the still-uncertain direction of U.S. relations with Russia.

“Based upon his extensive business dealings with the Putin government & previous opposition of efforts to impose sanctions on the Russian government, there are many question which must be answered,” tweeted Republican Sen. Lindsey Graham Tuesday morning. “I expect the US-Russian relationship will be front and center in his confirmation process.”

Graham was one of several senators to announce their concern after Trump settled on nominating Exxon Mobil CEO Rex Tillerson to his to top foreign policy job this week. Tillerson has spent his entire career at the company, working extensively on deals overseas, including multi-billion dollar deals in Russia. In 2013, Putin presented him with the Russian Order of Friendship in recognition of his work.

“I am concerned about his relationship with Vladimir Putin,” said Republican Sen. John McCain, the chairman of the Senate Armed Services Committee.

Thanks to Republicans’ slim, 52-seat majority in the Senate, it would take just three dissenting Republican senators joining up with Democrats to make Tillerson the first cabinet nominee to fail a confirmation vote since 1989. Tillerson could also be blocked in the Senate Foreign Relations Committee, if at least one Republican Senator votes against Tillerson and Democrats stand united in opposition.

Exxon Mobil has extensive business interests in Russia, including large projects that have been held up by U.S. sanctions. As CEO, Tillerson opposed sanctions imposed on Russia by President Barack Obama after Putin’s annexation of Crimea. The Russian president has also frustrated U.S. diplomatic efforts to wind down the civil war in Syria by providing support to Syrian dictator Bashar al-Assad.

Another issue that is likely to surface at the hearings is Trump’s refusal to accept the U.S. intelligence community’s assessment that Russia was behind election-related of the Clinton campaign, the Democratic National Committee and the Democratic Congressional Campaign Committee. Majority Leader Mitch McConnell has announced his support for a non-partisan Senate investigation of the intelligence community’s findings.

The first test for Tillerson and Trump will be the Senate Foreign Relations Committee. “Obviously, there’s been some flirting, if you will with Russia that’s a little different than what we’re used to. I think folks are a little shaken by that,” said the committee’s chair, Republican Sen. Bob Corker in an interview with CNN’s Jake Tapper. “I do think sanctions should continue to be in place.” But Corker has expressed openness to confirming Tillerson. “Just from the standpoint of experience, he’s got it,” Corker said.

Florida Sen. Marco Rubio, also a Republican member of the committee, has taken a more critical stance. “While Rex Tillerson is a respected businessman, I have serious concerns about his nomination,” he said in a statement. “The next secretary of state must be someone who views the world with moral clarity, is free of potential conflicts of interest, has a clear sense of America’s interests, and will be a forceful advocate for America’s foreign policy goals to the president.”

The Senate Foreign Relations committee will be divided next Congress between nine Republicans and eight Democrats. Democrats like Sen. Ben Cardin and Sen. Chris Coons, have been strongly critical. Sen. Cardin said he was “deeply troubled” by Tillerson’s opposition to sanctions against Russia after its invasion of Ukraine. If Tillerson’s nomination clears the committee, he will be subject to a floor vote, with Trump likely needing at least 50 Senators to support Tillerson, given that Vice President-elect Mike Pence can provide a tie-breaking vote.

McConnell has indicated he will support Tillerson. “We need a full review of our national security policy, and I know Rex [Tillerson] will face each problem head on with American interests and security as his top priority,” he said. “I look forward to supporting his nomination.”

RNC Chairman Reince Priebus, who is set to be Trump’s White House Chief of Staff, also suggested in an interview with MSNBC’s Morning Joe that the United States should reexamine its relationship with Russia, saying, “We just don’t believe that talking to people and having relationships is a bad thing.”

Others senators said they were open to Tillerson. “I’m not committed to voting against him,” said Republican Sen. Tim Scott of South Carolina. “I’m going to do my homework.”

Other Trump nominees will undoubtedly be forced to contend with the president-elect’s denial about Russia’s role in the hacks of the Clinton campaign and the Democratic National Committee. Rep. Mike Pompeo, Trump’s intended nominee to become the next Director of the Central Intelligence Agency, has been a vocal Russia critic, but will surely face questions of whether he agrees with the president-elect’s comments about Russia. And Trump is considering Carly Fiorina to the post of Director of National Intelligence. After meeting with Trump Monday, she didn’t immediately accept Russia’s role in hacking during the election, telling reporters after the meeting, “We talked about hacking, whether it’s Chinese hacking or reported Russian hacking.”

But Trump’s stance toward Putin and fears in Congress about a realignment in U.S.-Russia relations may dominate confirmation proceedings early next year.

“It is exactly because of President-Elect Trumps statements praising Putin, his flippant dismissal of the near-unanimous conclusion of the American intelligence community of Russia’s outrageous and unprecedented assault on our election by hacking, and the lack of clarity about his own potential conflicts of interests with Russian investors, that I see Tillerson’s friendship with Putin as a very concerning factor,” said Coons, the Democratic member of the foreign relations committee. 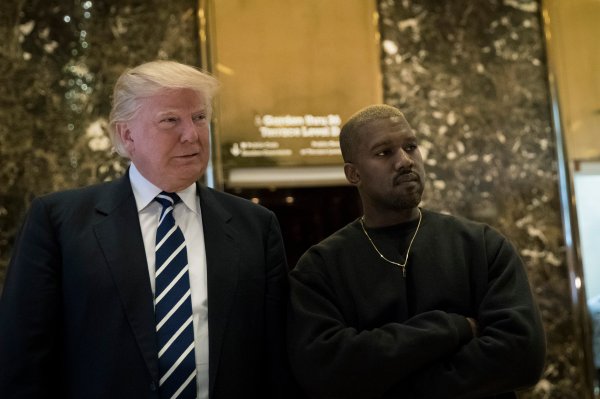 Kanye West Explains Why He Met With Donald Trump
Next Up: Editor's Pick