Steve McCurry: Egypt Must Drop All Charges Against Jailed Photojournalist

Photojournalist Mahmoud Abou Zeid, known as Shawkan, was arrested on Aug. 14, 2013, as he was taking pictures of the violent dispersal of the Rabaa al-Adaweya sit-in.
Courtesy of Amnesty International
By Steve McCurry

In 1984, I took a portrait of a young Afghan refugee girl with stunning green eyes who eventually became an international symbol for refugees around the world.

Sharbat Gula’s image is still iconic today, and especially relevant in light of the global refugee crisis. Despite being one of the world’s most famous refugees, Pakistan decided to deport her. She and her children were sent back to a country she hasn’t known since she was a child. Her story is representative of the injustices faced by the refugee community and has sparked action in support of refugees everywhere.

The freedom to tell compelling stories is vital to a free press. And yet, journalists from around the world have been harassed, threatened, locked up and tortured. Having been arrested and put in jail in Pakistan in 1980 for five days, I understand how it feels to be jailed, simply for doing my job. That’s why Mahmoud Abu Zeid’s story resonates so strongly with me.

Mahmoud Abu Zeid, better known as Shawkan, was taking photographs at a peaceful protest when security forces swept in to clear the camp with tanks, guns, and tear gas. By the end of the day, they killed 1,000 people and arrested many more.

Although Shawkan identified himself as a journalist on assignment for a photo agency, he was also arrested by the police. They tied his hands together with plastic cables, whipped him with a belt, and threw him into a police van. Since then, he has been held in Cairo’s notorious Tora Prison, which is famous for holding Egypt’s worst criminals. It’s been over three years.

International law protects freedom of expression and assembly. As Shawkan simply stated, when facing a judge at a court hearing: “Taking pictures is not a crime.” In a letter to Amnesty International, Shawkan described his indefinite detention as “psychologically unbearable,” stating that he was treated “like an animal” in the prison. He is not even receiving adequate medical care for the Hepatitis C contracted shortly before being arrested.

Yet he remains imprisoned, where he is beaten and tortured by the prison guards. These abuses, in retribution for covering a story authorities don’t want the world to know, are unimaginable.

Shawkan’s story isn’t an isolated case. This happens all over the world. His story is among hundreds worldwide that need to be investigated transparently so that perpetrators are brought to justice and so that journalists can work without fear of reprisal.

And yet, although the work is ongoing, it is not without hope. When people come together to call for action, governments and institutions take note.

On December 27, Shawkan will face a court hearing after more than three years in pre-trial detention. That’s three years too many that Shawkan has spent unjustly imprisoned, away from his family and friends.

In fact, under Egyptian law, detainees must be sentenced within two years of pre-trial detention, or they must be released. Likewise, international law stresses that detention before trial cannot occur except under exceptional circumstances, such as when there is a substantial risk of flight, harm to others or interference with the evidence or investigation that cannot be mitigated by other means.

This hearing is Shawkan’s chance for freedom. Amnesty International is calling for his immediate and unconditional release. The authorities must drop all charges against him. He could even face the death penalty.

Everyone all over the world has the right to seek, receive and impart information and ideas without fear or interference. As we consider the impact of the actions of repressive governments on the news industry, we should also remember journalists across the world who strive to do their jobs without legal protections. If human rights aren’t protected everywhere, they won’t be respected anywhere.

Steve McCurry is a visual storyteller and award-winning photographer. 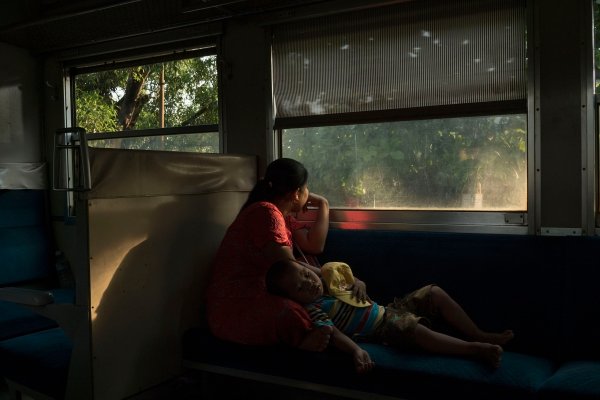 Hope and Despair in a Divided Burma
Next Up: Editor's Pick