A Syrian medical staff member inspects the damage at the site of a medical facility after it was reportedly hit by Syrian regime barrel bombs on Oct. 1, 2016, in the rebel-held neighbourhood of al-Sakhour, in the northern city of Aleppo.
Thaer Mohammed—AFP/Getty Images
Ideas
By Adham Sahloul

Adham Sahloul is an advocacy officer at the Syrian American Medical Society based in Gaziantep, Turkey

What happens when a hospital gets destroyed in war? Like a dead star, it collapses and burns, sending ripples of consequences to communities around it. It leaves a black hole for our collective conscience, for death was allowed to topple life.

“M10” was the nom de guerre of the Sakhour Hospital, an underground trauma hospital servicing the besieged civilians of eastern Aleppo City. It was destroyed in October 2016.

Aleppo was a once a historical jewel and economic powerhouse in the region. It may one day be rebuilt, but it will forever be haunted by the ghosts of childhoods robbed and families and friends separated by frontlines that decided east and west, life and afterlife. Through the course of the Syrian civil war, it became besieged by the Syrian government like cities before it in President Bashar al-Assad’s attempt to “cleanse” his country of all objection to his rule. If hospitals and schools were in the way, and chemical weapons and rape were the means, then so be it. And so it was.

Medical personnel and facilities have been targeted systematically by the Syrian government and its allies. Physicians for Human Rights (PHR) has documented at least 757 killings of medical personnel since the popular democratic uprisings began in March 2011. The Syrian government, its ally Hezbollah and Russia are responsible for more than 90% of those deaths. The latter half of 2016 has been the bloodiest stretch for humanitarians in Syria. In November, attacks occurred at a rate of one per 24 hours. In the past 162 days, there have been at least 147 attacks. More than a third of them took place in besieged Aleppo, all perpetrated by Syrian government and Russian forces. Assad has made targeting medics a key component of his military strategy. Killing a doctor ensures that hundreds will bleed to death; bombing a hospital terrorizes an entire neighborhood, driving displacement and forcing surrenders.

M10’s story is not unique to this crisis. But in looking at the ongoing government takeover of Aleppo, the destruction of the city’s most fortified hospital was the harbinger of the city’s collapse, if not its catalyst. There is a reason why the protection of medical personnel in times of war was enshrined in the Geneva Conventions. In Syria, we saw a deeper connection: as go the hospitals, so goes the hope of the people. Perhaps that is why al-Assad never viewed hospitals as neutral.

M10 is not the first hospital to be destroyed in Aleppo. From 2012 through 2014, the “M0,” Al-Watani, Abeer Sassila, Al-Kindi, Zahi Azraq hospitals and other health facilities were completely destroyed by the Syrian government in Aleppo. Most fell victim to the constant barrage of barrel bombs—literal barrels filled with TNT and shrapnel dropped by Syrian helicopters. In February of 2013, the Syrian American Medical Society (SAMS), a medical NGO servicing over 100 medical facilities across Syria, decided to establish M10 at the former Ministry of Health building in the Sakhour neighborhood. Fortification adjustments undertaken by NGOs were necessitated by the international community’s inaction as the Syrian government targeted doctors. As targeting ensued, SAMS moved the facility underground.

“A hospital is a place of life. M10 was not destroyed by bombs. It was killed by the worst weapon of all—the world’s silence,” Dr. Osama Abu El Ezz, the SAMS Aleppo field coordinator told me. I and others tried telling the story of M10 and its brave doctors while its staff breathed faith and resilience into its corridors and their unimpeachable heroics might have shaken the world out of inertia. Doctors, a little girl who reads Harry Potter, rescue workers—real people with real lives and real fears that we had to present as characters from Aleppo who should have been impossible to ignore or retweet. In a world that is increasingly interconnected with citizenship increasingly global, it seems odd that the worst humanitarian crisis of our time never raised the political costs of inaction in Western capitals.

I will forever think about how Syria’s doctors managed their fear under the constant threat of death. You cannot fear hell when you have already faced it. No matter how well the doctors, should they survive, tell their story, it is beyond our imagination. Hell visited M10 on a daily basis. Patients bled on the floors of overcrowded operation rooms while doctors and nurses had to decide who would live and who would die. The hospital was bombed at least 13 times until it was finally destroyed in October.

The last attack was a bunker buster bomb—introduced by Russian warplanes very recently in Aleppo that is able to penetrate underground fortifications. The facility, its equipment and its fuel and water supplies were mostly beyond repair; it was even being bombed while being repaired to provide rudimentary medical services with what remained. The staff never wanted to leave, as, in their words, they had a job to do and their fate was in God’s hands. Some of the staff had been living and working in the hospital since August. In the end, the decision to withdraw was made for their safety. But this was a crushing blow.

The final chapters of Aleppo’s story are being written. We hear testimonies that crush the soul in their weight and whose rawness leaves you cold and numb—and embarrassed. Any writer or journalist should feel embarrassed that such memories must be transcribed, into words and for readers that are light years removed from their subject and for articles that will disappear into the endless scroll of the internet.

M10 received no shortage of media coverage over the course of the siege, since July 2016. It and its doctors and nurses received no semblance of help as their voices went hoarse and belief in the international community dimmed as the months and bombs kept coming. Never before have war crimes been so well documented and broadcasted. The reality was as blindingly bright as the sun; perhaps that is why President Obama and other world leaders looked the other way. Is this the template for mass atrocities and warfare in the modern age? It could be that Syria was a perfect storm, where Obama inherited a war-weary country and a millennial generation far removed from the notion that it was important to act in the face of tyranny. How else could we know so much but care so little?

The massacre of Aleppo happened because the Syrian government and Russia knew they would meet no resistance from West. Last month, the Aleppo Health Directorate announced the collapse of the healthcare system in besieged Aleppo. What came next was no surprise: in the past two weeks, forces loyal to Syrian President Bashar al-Assad have seized most of East Aleppo along with the Sakhour neighborhood. They captured M10.

Days ago, Syrian state television broadcast an investigative piece on the hospital, propagating suspicion about the motives of the doctors and life-savers who received monetary support and medical supplies from donors from foreign countries. They zoomed in on a mammography machine that was manufactured by General Electric, which they pointed out was an American company, which in their description was part of a broader American conspiracy to concoct regime change in Syria save lives. This is a distraction. In that hospital is the corpse of the international community, M10’s last patient.

The government’s advance displaced tens of thousands into Aleppo’s southeastern neighborhoods and in a mass exodus into government-held West Aleppo and surrounding areas. The remaining doctors in East Aleppo fear what comes next, uncertain of their families’ fate, unable to accept that they will leave their homes and hospitals after all they have been through.

I spoke to Dr. Farida, the last OBGYN specialist in Aleppo, of the “M2″ hospital, which has been bombed out of operation. In Aleppo’s last breaths, she was doing all she could to support maternity health capacity in the shrinking, increasingly miserable space. “What will you do if they evacuate?” I asked. “I do not know,” she said. “But we want to burn the hospital before we leave.” It took me a minute to process what she had said. “Why burn the hospital?” “So our hearts do not burn when we see their military boots enter it like M10.”

The plan to preserve the hospital’s dignity never materialized. In recent days M2 and the neighborhoods around it have since been overtaken, while Dr. Farida and the other survivors await their fate in the remaining three neighborhoods. Plans for evacuation of the medical staff and the wounded were doomed with the recent Russian veto at the U.N. Security Council, and Syrian government obstructionism on the ground, a trademark of both parties, respectively. We now hold our breaths as the latest internationally brokered plans for civilian evacuations unfold, hoping the doctors and their families, along with everyone else, make it out alive.

For Syria observers and those of us in the humanitarian community, the worst case scenario is playing out before our very eyes. We can message Aleppo’s people on WhatsApp, but they are truly alone. The mantra of doctors and rescue workers in Syria has been, “whoever saves one life, saves all of humanity.” It seems humanity sat this one out. 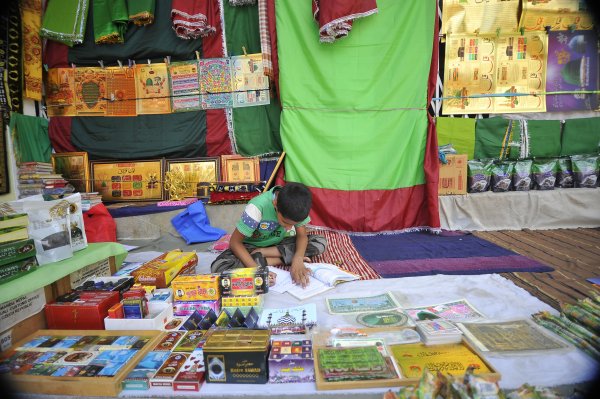 Local Communities Must Take the Lead in Global Change
Next Up: Editor's Pick