BLM Co-Founder: Obama Should Help the People Who His Presidency Failed

Garza is a political strategist, principal of Black Futures Lab, and co-founder of Black Lives Matter.

What happens following the presidency of Barack Obama, is a question many black people, including me, aren’t excited to think about. I have significant political differences with Obama and the Democratic Party. Yet I will join the legions of black people and people of color across this nation who wonder whether this is the last time we will ever see a black president in our lifetimes.

As far as presidents go, there was something special about having a black person in the Oval Office. Obama awakened a sense of possibility that black people can be powerful in a nation that systematically and intentionally keeps them powerless.

The party that erupted in my East Oakland neighborhood when Obama was elected for the first time in 2008 was unlike anything I have seen in my lifetime. In a community where a majority of the residents are working-class Latino and black immigrants and Americans, I witnessed everyone taking to the streets and cheering about the election of a black man to the Oval Office. It impacted me profoundly.

To some immigrants, Obama represented the hope that we could keep families together and reform a deeply racist immigration system, while turning the tide of vigilantism and racial terror against immigrant communities. For some black people, both U.S.-born and immigrant, there was a glimmer of hope, no matter how short-lived, that perhaps a black person as the leader of the free world would expose what black people have survived and continue to endure, while ensuring that we could finally thrive.

Obama had many accomplishments, including commuting the sentences of more than 1,700 people imprisoned due to racist drug laws, and establishing a commission to study the problem of policing and offer recommendations. This makes him the only President in history to have granted as many second chances.

The Affordable Care Act is another important accomplishment of Obama that should not be dismissed, particularly as Republicans are gleefully gutting a system developed from their own playbook and millions of Americans stand to lose affordable coverage while insurance companies laugh all the way to the bank.

The outcomes of the last eight years didn’t come to realize Obama’s promised vision of hope and change, and that has ushered in disappointment from many of us who, either vocally or quietly, hoped that he would be able to advance more than he has, particularly as it relates to the ways in which race and racism negatively impacts our society, our democracy and our economy.

Obama Should Change Our Approach to the World

In 2016 alone, there were more than 1,000 murders by the police in the United States. Nearly a third of those who were killed are black, despite the fact that black people are a mere 13% of the nation’s population. There has been no White House mention of the at least 21 trans people, the majority of whom were women of color, who were killed in the United States last year.

When it came to black people, Obama often weighed heavily on the notion of personal responsibility for black people, at the expense of systemic accountability. When Michael Brown was gunned down in the street with more than ten shots, our President did not acknowledge that Mike Brown could have also been his son, as he did for Trayvon Martin years earlier. Instead, h encouraged young black people not to hate the police, because they have hard jobs, and failed to get tough with police departments that demonstrate a pattern and practice of abusing, murdering and torturing—as happened in his home base of Chicago—black people in epidemic proportions.

In the aftermath of the election, and with a new President, we have an opportunity to get real about the ways in which race and racism shapes our life chances, our access to and the outcomes of our democracy. The change that so many people voted for in 2008 did not materialize in all of the ways that many of us wanted it to. And yet, faced with a new administration that is seemingly hell bent on rolling back nearly everything we’ve fought so hard for over the last forty years, our mandate could not be more clear.

Recently, author and historian Jelani Cobb pointed out that my generation could spend our lifetimes trying to fix the outcomes of this next four to eight years. That is not a future I am willing to accept. It is not a future that any of us should be willing to accept. There isn’t much chance that Donald Trump or his administration will genuinely address the issues that have plagued black communities for generations. But I still have hope that Barack Obama will take this opportunity to join and help build this movement and do so from a place that values and celebrates the sacrifices and courage that so many black people have demonstrated not just over the past few years, but throughout the complicated history of this nation.

It is our hope, our love for one another and ourselves, and our belief in a better future that leads us to fight for our government officials, especially to fight for the first black president, to take a stand against the millions of families being torn apart by deportations. A stand against African migrants dying in the Mediterranean Sea by the thousands. A stand against black people being murdered, abused and tortured by the people sworn to protect and serve them. We want the first black president to stand with us and do everything in their power to hold police accountable for the havoc they wreak in our communities. President Obama, we want you to do everything in your power to protect the sanctity of black life.

Albert Woodfox spent forty-three years in solitary confinement in Louisiana. And there are many more like him that are experiencing this kind of cruel and unusual punishment. There are one million black people who are currently incarcerated and more than 200 black people a year being killed in our communities by law enforcement. A fifteen-year-old black girl named Bresha Meadows is being tried as an adult for allegedly killing her abusive father. Black girls are being abused in their classrooms by police officers. Black communities face a multitude of crises, and those crises got worse under the administration of the first black president of the United States of America.

We are in a significant moment. The most pervasive and successful black social movement in at least 30 years has emerged and created space for the change we all desperately deserve. It emerged during the administration of Barack Obama, the first black president in the 238 years since the U.S. elected its very first. After January, I would like to see him join the movement for black lives. I would like him to spend the next year meeting with the families who have lost loved ones to police and state-sanctioned violence. I would like him to use his expertise and familiarity with how politics work to make democracy work for black people.

Away from the cameras, away from the compromises necessary to be a politician, my hope would be that the President would see how we’ve been impacted by the failures of this democracy, and that together, we could utilize more than sound bytes to get our people the relief we deserve.

Now that Obama has left office, he will still have a large and impactful platform. It’s my hope that he uses it to amplify the resilience and courage of black people. It would be a welcome change from what many, including myself, have considered an approach that lends itself well to incrementalism—which millions of us can no longer afford. 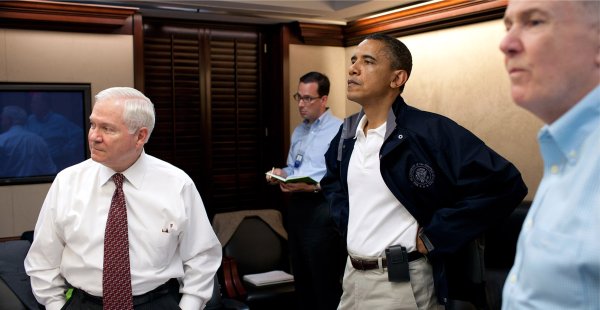 Obama Should Change Our Approach to the World
EDIT POST