Why Refugees Don't Stay in Turkey or Greece

A man prays outside his tent set up on a beach at the Souda municipality-run refugee camp on the Greek island of Chios on October 13, 2016.
LOUISA GOULIAMAKI—AFP/Getty Images
By Katie Kuschminder, European University Institute and Khalid Koser, United Nations University / The Conversation

The European Commission has decided to start returning migrants from other European countries back to Greece, lifting a ban on the practice that was put in place in 2011. The decision is influenced by concerns that 13,000 migrants recently disappeared from camps in Northern Greece and may have migrated onwards into Northern Europe. European leaders also want Greece to start returning migrants to Turkey under the EU-Turkey agreement.

As the current migration and refugee crisis has unfolded, one question has frequently been asked: why don’t refugees just stay in Turkey or Greece?

Because migration research tends to focus on why people leave their home countries in the first place, we often miss the critical in-between step. Indeed, migrants may try to establish a life in an intended destination country, such as Turkey or Greece, but then be compelled for different reasons to move on. Alternatively, refugees may become “stuck” in a country that was intended to be a stop-over on a longer journey.

We wanted to find out how migrants in Greece and Turkey viewed their current situations and planned for the future. From May to June 2015, we interviewed more than 1,000 migrants from Afghanistan, Iran, Iraq, Pakistan and Syria. The respondents included both migrants who had only recently arrived at Turkish or Greek refugee camps as well as people who had lived there for several years.

Why refugees want to leave

Overwhelmingly, we found that most respondents wanted to migrate onwards from Turkey and Greece, and surprisingly, more so from Greece than from Turkey. Of migrants in Greece, 73% wanted to move on. In Turkey the figure was 53%.

In Greece, the desire to continue migrating did not vary according to migrants’ current legal status. That is, respondents designated as refugees were just as likely to want to move on from Greece as those without that status. This was contrary to our expectations, because when refugees migrate irregularly onwards, they give up their right to protection in Greece.

Our research also shows that the destination migrants had most wanted to reach when leaving their country of origin significantly affected their current migration intention. Respondents who had initially planned to migrate to Greece or Turkey were, of course, less likely to want to move on from those places.

In Turkey, we found that refugees who were employed were significantly less likely to seek to leave, despite the fact that nearly all respondents were employed without permission. Having any kind of job in Turkey was a critical factor in wanting to stay.

Those who want to stay

A much smaller group of respondents intended to settle in Greece or Turkey. For these migrants, the most significant factor influencing their decision was that the current host country was peaceful. The second most important factor was money: they lacked resources to continue the trip.

Very few respondents intended to return to their home country – less than 2% in Greece and 7% in Turkey. The most important factors for them were the inability to satisfy their initial migration goals, followed by a desire to be reunited with family

The decision of where to move on to is critical for asylum seekers and refugees. The figure below shows the destination of choice for the respondents who wanted to migrate onwards.

Germany was the top destination choice country by a significant margin. It’s important to note that we conducted these interviews before Chancellor Angela Merkel openly welcomed refugees to Germany in August 2015. This suggests that, contrary to the media reports claiming that Merkel created the refugee crisis in Germany by opening the borders, migrants and refugees were already on their way.

Sweden is the second most desired destination country among the migrants we interviewed. This finding is reflected in the geography of asylum claims made in the EU in 2015, of which Germany and Sweden had the highest number. Among other EU countries, differences in migrants’ interest levels are mostly marginal.

It is thus likely that these migrants were being driven by circumstances in Greece or Turkey, not attracted by specific conditions in target destination countries.

Dreaming of a better life

The EU-Turkey agreement allows for the return of people crossing by boat from Turkey to Greece if they do not have a valid asylum claim. It has significantly reduced the flows of people coming to Europe via these two countries. The closing of the northern borders in Greece has also trapped roughly 61,000 people in Greece.

Based on our research, it is likely that the majority of migrants and refugees who are now effectively stuck in both Greece and Turkey want to migrate onwards.

The reasons for this are clear: poor living conditions, lack of employment opportunities and the desire to fulfil their initial plans. It is concerning that the EU seeks to start returning migrants again to Greece, considering the conditions they face there.

Europe’s current political focus is on preventing migrants in Turkey and Greece from migrating onwards, but without understanding what compels people to stay or go. Without a long-term solution, migrants will continue to wait for an opportunity to create a life for themselves and their families elsewhere. 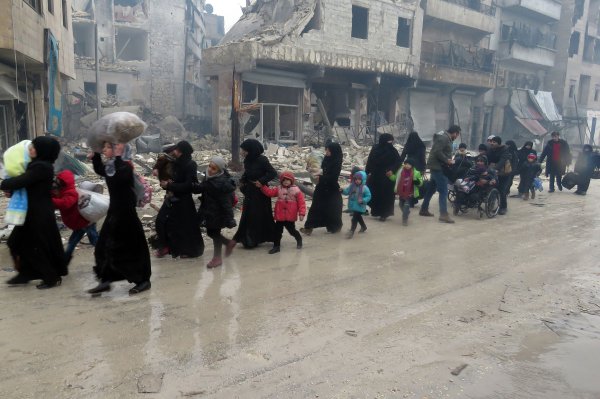 Aleppo Set to Fall to Regime as Ceasefire Agreed
Next Up: Editor's Pick