Dylann Roof, 21, listens to proceeding with assistant defense attorney William Maguire during a hearing at the Judicial Center in Charleston, S.C., on July 16, 2015.
Randall Hill—Pool/Getty Images
By Mahita Gajanan

The man accused of killing nine black parishioners in a Charleston, S.C., church last year had a handwritten list in his car noting other black churches in the area, according to testimony shared in his death penalty trial on Monday.

Dylann Roof faces 33 counts of murder, attempted murder and committing a hate crime that resulted in death following the June 2015 massacre that stunned the nation. Monday’s developments in the trial, which began Dec. 7, revealed that Roof had named Morris Brown AME, Calvary Episcopal, Central Baptist, Ebenezer AME and a house of worship whose name on the note was smeared by water damage, in addition to Emanuel AME where the shooting occurred.

Investigators also discovered lists by Roof of different cities and towns in the state, noting the ratios of black to white people living in each, according to South Carolina Law Enforcement Division agent Brittany Burke, who processed Roof’s car after the shooting.

Other items found in Roof’s car include a laser sight device for a gun, receipts for his gun and ammunition, a Confederate flag and two American flags, one of which was burned, Burke said. A journal and letters Roof had written to his parents were also recovered from his car, according to testimony last Friday.

During Monday’s proceedings, SLED forensic firearms analyst James Green testified that 74 shell casings and dozens of bullet fragments were fired by Roof’s .45-caliber Glock, which ballistics tests identified as the gun used in the shooting, according to the Post and Courier.

Roof bought the weapon in April, two months before the shooting, Ronald Thrailkill, a prosecution witness who sold the gun to Roof at Shooter’s Choice, said on Monday. When filling out a form that asks prospective buyers whether they are eligible to purchase a firearm, Roof checked “no” to a question about unlawful drug use, even though he had admitted to police that February to using an opiate addiction-treating narcotic without a prescription.

That admission should have denied him under federal rules. But, Thrailkill said, the arrest was missed in the background check. He later bought the gun and returned for more ammunition. Thrailkill said he received a notification from the federal agency responsible for the background check on June 29—almost two weeks after the shooting—that the sale to Roof was to be denied. 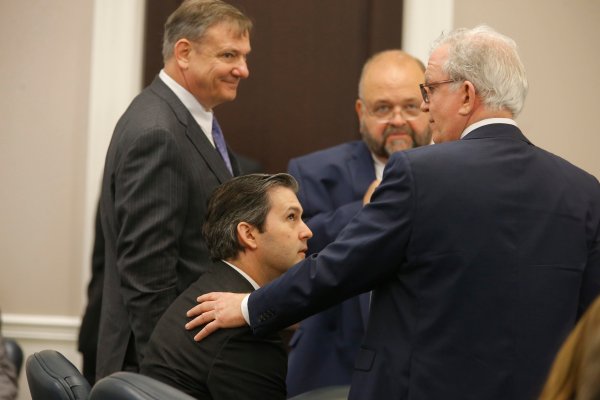