German Chancellor and Chairwoman of the German Christian Democrats Angela Merkel prepares to wave to applauding delegates after she gave her central speech at the 29th federal congress of the CDU in Essen, Germany, on Dec. 6, 2016.
Sean Gallup—Getty Images
By Simon Shuster / Berlin

German Chancellor Angela Merkel knows what it’s like to be underestimated. Her political party, the Christian Democratic Union, was a stodgy old boys’ club when she first joined in the early 1990s, and most of her rivals tended to dismiss or ignore her, the pastor’s daughter with the chemistry degree — even as she passed them on her way to the top. What bothers her now, more than a decade into her tenure, is the opposite problem — the burden of being overestimated.

Merkel has President Barack Obama to thank for much of that. During his last official visit to Europe in mid-November, about a week after Donald Trump won the U.S. presidential race, Obama spent hours preparing Merkel for the likely consequences of Trump’s victory. Intentionally or not, the outgoing U.S. President also gave the impression of “passing the baton” to the woman he called his closest foreign ally, leaving her to defend the liberal establishment that Trump and his cohorts in Europe had set out to dismantle. Many commentators even began referring to Merkel as the new leader of the free world, a title that she dismissed as “grotesque” and “absurd.”

This was not false modesty. The problems that her government faces at home — from the integration of refugees to the rise of right-wing populism — do not leave the Chancellor with much strength to keep the West united. Merely staying in power beyond next year will be enough of a challenge for Merkel, and even some of her closest allies tell TIME that their government lacks the means and the mentality to lead. But whether she is prepared for it or not, this role may fall to Merkel by default.

The wave of popular revolts against the establishment has been picking off her Western allies like ducks in a shooting gallery. Four of them have fallen in the past six month alone: French President François Hollande, with an approval rating in the single digits, announced this month that he would not seek re-election in the spring; British Prime Minister David Cameron resigned in June after the U.K. voted to leave the European Union; Italian Prime Minister Matteo Renzi pledged to do the same after voters rejected his constitutional reforms this month; and, in the most astounding upset of the year, Trump’s victory has left Obama’s liberal legacy in tatters.

That leaves Merkel to pick up the pieces, but even her friends have serious doubts about her ability to lead the free world. “That’s stupid,” says Elmar Brok, the German chairman of the foreign affairs committee in the European Parliament, who has known Merkel since she was just starting out in politics in the 1990s. “Germany does not have the critical mass of power to play the role of leader.”

Nor is it clear that Merkel is strong enough, even within her own country, to uphold the liberal values that many people now expect her to defend. Her decision last summer to welcome hundreds of thousands of refugees from the Muslim world was, in many ways, a triumph of moral leadership over political expedience, and it was part of the reason TIME picked her as Person of the Year in 2015.

But that act of courage came at a devastating price. Conservatives within her ruling coalition went into revolt over her refugee policy. Many of her supporters fled to the far-right party Alternative für Deutschland (AfD), whose platform claims that Islam is “not a part of Germany” and calls for a ban on minarets and burqas, the traditional veils that some Muslim women use to cover their faces. During a local election held in September, the AfD even defeated Merkel’s party in her own home district in the north of Germany.

That humiliation helped persuade her to claw back the ground she had lost to the radical right. During her speech on Dec. 6 at the national convention of the Christian Democratic Union, the party she has led for nearly 16 years, Merkel said that Muslim women should be prohibited, “whenever legally possible,” from fully veiling their faces in public. It was a stunning reversal for a leader whose name has become synonymous with her country’s Willkommenskultur, or “welcome culture,” toward Muslims and refugees, and whom some grateful Syrian asylum seekers called “Mother.”

But it was also, in many ways, a return to Merkel’s conservative roots. After the defeat of Nazism and the end of World War II, the entire right wing of German politics was occupied for decades by the Christian Democrats and their Bavarian sister party, the Christian Social Union; its late figurehead, Franz-Josef Strauss, famously declared in 1986 that, “There must be no democratically legitimate party to right of the CSU.”

That status quo — and the narrowly centrist political spectrum of allowable German politics — held until the AfD was founded in 2013. Its populist message against immigration has since seen a surge in support across Germany. Even in Berlin, the nation’s diverse and cosmopolitan capital, the AfD won 14.2% of the vote during September’s election to the local legislature. Merkel’s party was not too far ahead with only 17.6%.

So the Chancellor’s tactical swing to the right last week was no surprise. Her base of support had demanded it, and her call to ban the burqa during the party convention got more applause than any other line in her 80-minute speech. Among the delegates who gathered in the industrial city of Essen for the convention, some felt a renewed affection for Merkel after that speech. “She said a lot of things the party wanted to hear, that we all wanted to hear,” Andreas Weber, a delegate from the working-class town of Helmstedt, told me after the speech. “With Obama leaving the stage,” he added, “of course she is the leader of the free world.”

Her party is still the most popular in the country by far, with 33% support in the latest polls; 64% of respondents backed Merkel’s decision to run for another term as Chancellor. In a separate survey published last month by the Koerber Foundation, a Berlin policy institute, 59% of Germans said they want their country to take an even more active leadership role in Europe. But Merkel’s allies do not seem keen to expand that role to other parts of the world. “This is not our mentality,” says Norbert Roettgen, chairman of the foreign affairs committee in the German Parliament. “This is beyond our ways,” he told me, “beyond what we can do.”

It was only in 2014, when Russia defied the West by redrawing the borders of Ukraine by force, that Berlin stepped up for the first time to lead the E.U. through a foreign policy crisis. But that was done in lockstep with Washington, and with ample encouragement from President Obama. Now that Trump is on his way to the White House with a promise to “get along” with Russia, the world will soon look a lot lonelier to Merkel than it did a year ago.

For most leaders, that would seem like a demoralizing prospect. But it may have helped inspire Merkel to run for another term in office — a decision she announced 11 days after Trump’s election victory. “If we still had a President in the U.S. who was caring for the liberal order, I could easily imagine her stepping aside,” says Sylke Tempel, the editor of the Berlin Policy Journal. “But now it would go totally against her sense of duty.” That doesn’t mean Merkel has the clout or the resources to lead the Western world, or even survive the next elections. It just means she feels the need to try. 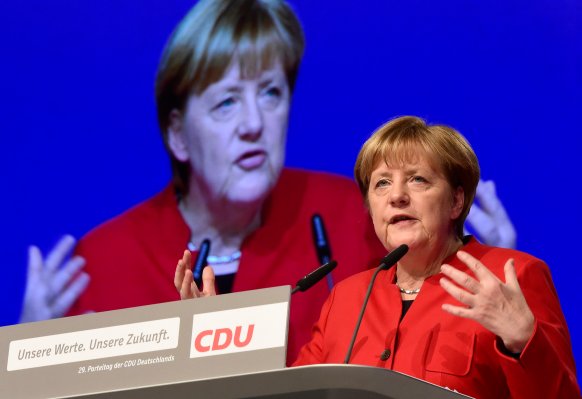