Man Who Stabbed Worshipper Outside a California Mosque Charged With Hate Crime: Authorities

A man has been charged with a hate crime for stabbing a worshipper near a mosque in Simi Valley, Calif. on Saturday night.

John Matteson, 29, allegedly confronted the man at a shopping center next to Masjid Al-Rasool mosque and started an argument before attacking him after 11 p.m. Saturday.

“During their investigation, [officers] discovered a suspect had confronted a worshiper from the mosque, and after a verbal altercation, they began to fight,” Sgt. Adam Darough told the Los Angeles Times. “During the fight, [the suspect] stabbed the victim.”

The 36-year-old victim was hospitalized and is in stable condition with a perforated bowel, the Washington Post reports.

Officers booked Matteson for making criminal threats and violating the civil rights code, which are both felonies, and also charged him with the misdemeanor of disturbing the peace by fighting. For the felony charge of violating civil rights, records show Matteson was charged under California Penal Code section 422.7, which is part of California’s “hate crime laws.”

“We’re investigating whether or not this was instigated by [the victim’s] appearance and the association with the mosque,” Darough told the LA Times. “We’re quite concerned that this occurred. We want to keep people of all faiths safe in the city.”

Bail was set at $25,000. Matteson will appear in court on Tuesday, the LA Times reports, though it was unclear whether he had a lawyer. A second suspect who fled the scene is still at large, the Post reports. 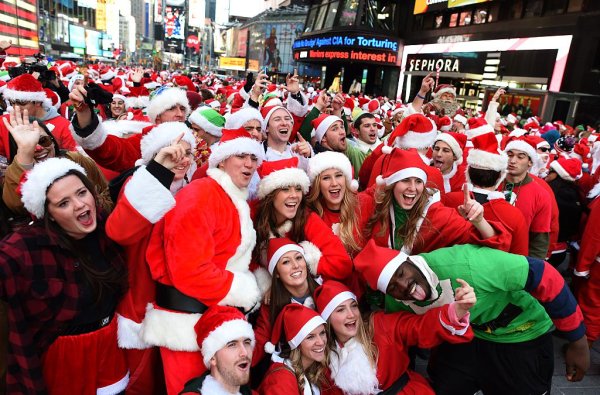 Everything You Need to Know About Santacon 2016
Next Up: Editor's Pick