People gather to celebrate in Saint George's Square after the Maltese parliament approved a civil unions bill in Valletta on April 14, 2014. Malta's parliament approved the bill that grants marriage rights to homosexual couples, including the possibility to adopt children.
Matthew Mirabelli—AFP/Getty Images
By Kate Samuelson

Malta, the tiny southern European island with a population of just over 420,000, made history earlier this month by becoming the first European country to criminalize “deceptive and harmful” conversion therapy, defined as any practice which aims to change, repress or eliminate a person’s sexual orientation or gender identity.

Under the new bill which was passed unanimously on Dec. 5, those who practice conversion therapy will face fines ranging between €1,000 and €5,000 ($1,065 and $5,324) and a potential five month jail term. The bill also states that neither sexual orientation nor gender identification can be classified as a disease, disorder or shortcoming of any sort. In addition, the age at which people can independently request for their gender to be changed in official documents has been lowered from 18 to 16.

These are bold moves for a predominately Catholic country that only began allowing divorce in 2011, and is the only member of the European Union that still considers abortion of any kind to be a criminal offence. Yet Malta is ranked number one in the ILGA-Europe (International Lesbian, Gay, Bisexual, Trans and Intersex Association) ranking of all 49 countries in Europe in terms of their respect of human rights and equality.

Since Marie Louise Coleiro Preca of the Labour Party was sworn in as Malta’s president on April 4 2014 (at 55, she became the country’s youngest president in history), a number of progressive bills have been introduced, from civil unions to equal adoption rights for same-sex couples. On Nov. 30, the government’s Civil Liberties Minister, Helena Dalli, was awarded the Hero of the Year award at the European Diversity Awards held in London, partly for overseeing the enactment of a law that removes the legal requirements for LGBTQ people to have their gender identity recognized by the state.

“Life has changed a lot for gay people in Malta over the past two years,” says Russell Sammut, a Maltese citizen who runs gaymalta.com, part of the Allied Rainbow Communities nonprofit organization. “Up until 2014 we had no rights here, but once civil unions were enacted people changed their attitudes overnight. Everyone is afraid of the unknown, but now they’ve seen there’s no threat to society, they’re fine with same-sex partnerships.”

Sammut, 31, who came out aged 16 and says he’s never had any “major issues” in terms of homophobia in Malta, thinks the new bill sends an important message to Maltese citizens. “The clear message from the state is that if you’re gay that’s fine and there’s nothing you should be getting cured of,” he says.

A left-wing, LGBTQ-minded government is not the only reason why Malta is paving the way for gay rights in Europe. Boris Dittrich, advocacy director of Human Rights Watch’s Lesbian, Gay, Bisexual and Transgender Rights Program, believes Malta’s gaining of E.U. membership in May 2004 has made a huge difference to the country. “Like the U.K., Malta is an island and people can be inward looking there,” he tells TIME. “E.U. membership and the increased tourism that came with it has changed this.”

However, while Malta has been recognized for its more progressive policies on gay rights, in some respects it is still very conservative. HIV treatment provisions are well behind other European countries, Sammut says, and abortion remains a taboo. “It’s too controversial. Governments put it on the back-burner and don’t want to discuss it,” he adds.

Moreover, some feel the city’s acceptance only goes so far. Lauren Salerno, a 53-year-old transgender woman who moved to Malta from the U.K. roughly six months ago due to what she calls “severe transphobia” there, does not think the island where her parents grew up is as supportive and open towards trans rights as it is towards gay rights. “On the surface, Malta is more accepting and there’s a lot less direct discrimination here,” she tells TIME. “But when I tried finding work I was basically told that I didn’t look right, even for things like waitressing or shop jobs. I had a weekend trial in a restaurant but customers complained – not about my service but about me being trans.”

Salerno has been in transition since 2009 and a trans-activist for around 15 years. Three decades ago, aged 22, she enrolled on a Christian rehabilitation program in the U.K. not unlike the conversion therapies that have recently been outlawed in Malta, but with a focus on drugs and alcohol. “It was my decision [to enrol] because I was brought up believing being trans was wrong and evil and I loathed myself because of it,” she says. “I was an extremely vulnerable person at the time; I’d had two breakdowns and lost both my parents. During the program I had psychological and psychiatric counselling, demons cast out of me and I was basically told to get married and have lots of sex, which would cure me.”

Hearing that Malta has outlawed such therapies pleases Salerno, but she is frustrated that despite recommendations from the Commissioner for Human Rights, treatment still isn’t free for Maltese trans people. Her own treatment has been on hold since moving because she says doctors will not prescribe her hormones. “I’m glad this ban is in place and trans rights certainly have been hugely advanced in Malta. But, for me, it seems like a lot of the peripheral issues like changing a name or conversion therapy have progressed, while this fundamental human right to be treated for our gender dysphoria is on the back-burner.”

In Salerno’s experience, the most progressive Maltese citizens are those who have studied outside Malta or, like Salerno, have lived off the island for many years before returning. “There is such a Catholic-based conservatism underlining Maltese thinking and it’s problematic,” she says, voicing fears that if the E.U. were to collapse then this kind of thinking might prevail. “The E.U. is the only national external body in Malta that is liberal. If that were removed you’d have no progressive voice, no liberal voice, which would be hugely frightening.” 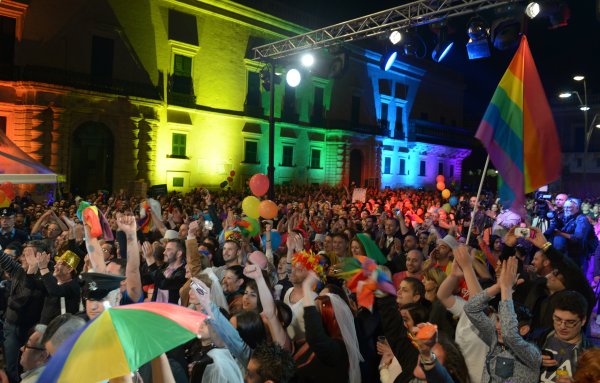