U.N. Secretary-General 'Alarmed' Over Reports of Atrocities in Aleppo

A spokesperson for Ban said in a statement that the outgoing U.N. chief “is alarmed over reports of atrocities against a large number of civilians, including women and children.” Ban also stressed that all participants in the conflict are obliged to “protect civilians and abide by international humanitarian and human rights law,” and in particular called on the Assad regime and its allies to do so.

Thousands of civilians and rebel fighters remain trapped in the besieged eastern part of the city, which has been a key battleground in the Syrian civil war, as Syrian troops prepare to close in.

Read More: ‘We Are About to Die’: The End Comes for Aleppo

“The battle in eastern Aleppo should end quickly. They [rebels] don’t have much time. They either have to surrender or die,” said Lieutenant General Zaid al-Saleh, head of the government’s Aleppo security committee, according to the Guardian.

Ban’s statement comes as U.N. senior advisor Jan Egeland tweeted that Russia and Syria were “accountable for any and all atrocities that the victorious militias in Aleppo are now committing,” according to the BBC.

Last week, Egeland said that cooperation from all actors in the Syrian conflict would be necessary for the U.N. to provide humanitarian help in Aleppo, but the different sides were “poles apart” in talks. Last week, Russia and China blocked a U.N. Security Council resolution demanding a seven day truce in Aleppo.

Ban will step down as General-Secretary at the end of the year, completing a 10-year tenure, and will be replaced by former Portuguese Prime Minister Antonio Guterres, who was sworn in to the U.N. top job on Monday. 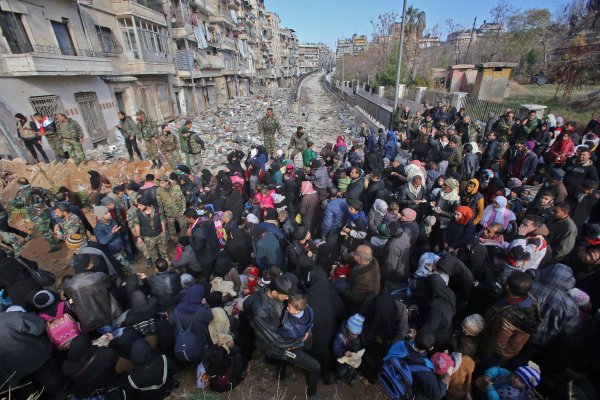