U.S President-elect Donald Trump’s remark on Sunday that the U.S. under his Administration may not necessarily recognize Beijing’s “one China” principle when it comes to cross-strait relations has been welcomed in the Taiwanese capital, Taipei. But it has also raised fears that the small, self-governing island could bear the brunt of Beijing’s ire on the issue.

The principle holds that both the Chinese mainland and Taiwan, which Beijing regards as a renegade province, are part of the same nation. Washington has diplomatically acknowledged Beijing’s position on the issue since Washington severed ties with Taipei in 1979.

Reaction in Taipei on Monday was muted as analysts took stock of the consequences of any potential change of U.S. policy under a Trump Administration.

Political analyst Antonio Chiang says that while Trump’s comments prompt a much needed debate on the position of Taiwan in the world, the Taiwanese are becoming increasingly nervous.

“People are worried about this. Maybe this is his intention now, but we can see that Beijing will become more hawkish and angry at Taiwan. So I think people here are very cautious because this kind of remark will translate into what kind of situation? We don’t know,” he says.

Sources close to the Tsai administration have indicated that the decision of the traditionally cautious Taiwanese President to make a congratulatory call to the U.S. President-elect was not taken lightly, with the government fully aware of a potential backlash from China.

Tsai’s Democratic Progressive Party (DPP) is officially in favor of Taiwan’s independence, but she has been circumspect about the issue since she was elected in May 2016.

China has already frozen ties with Tsai’s administration over her refusal to subscribe to the so-called 1992 Consensus, drawn up between Beijing and the Kuomintang (KMT) administration, then governing Taiwan. The consensus states that both China and Taiwan were part of the same country, while diplomatically skirting around the issue of who or what would constitute the legitimate government of that country.

While Trump has raised the stakes, Taiwan has the most to lose militarily and economically in any future diplomatic U.S.-China standoff about its status.

“The bit that worries me is when he [Trump] says we are not bound by a one-China policy unless we make a deal with China to do with other things, including trade,” says J. Michael Cole, a research associate at the Taipei-based French Centre for Research on Contemporary China.

“This evidently gives some of us pause because it smacks of Trump saying that Taiwan could be a bargaining chip on different issues.”

Cole predicts that the Tsai administration would be reaching out to Trump’s advisers to urge caution.

“Whenever there are signals that the security guarantor is looking at you as a means to an end — as a bargaining chip — of course it makes people very nervous,” he says. “That’s been a long-standing issue for Taiwan. There is always fear of abandonment.”

The KMT — Taiwan’s main opposition party, which favors closer ties with Beijing — initially welcomed Trump’s call with Tsai, but made a point of reaching out to Beijing in a press statement following his comments on Fox.

“Peace in the Taiwan Strait should not be sacrificed under any circumstance. The KMT will continue to maintain a high-level relationship with both mainland China and the United States to safeguard regional stability,” says KMT international spokesman Eric Huang.

However, Trump’s recent statements have given hope to others like Michael Tsai, a former Defense Minister under the last DPP government in 2008, who now leads the Taiwan United Nations Alliance, a group lobbying to end Taiwan’s exclusion from international bodies.

“We hope that Trump will say that Taiwan is Taiwan and China is China and that Taiwan is not part of China,” he says. “If that kind can be confirmed by the Trump future government, then that would help Taiwan to participate in the international community, including in the United Nations.” 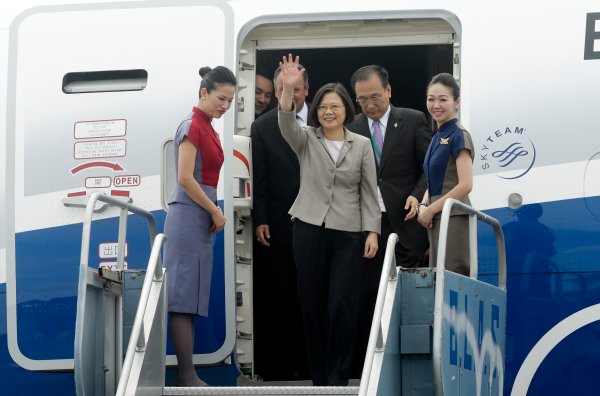