China Says Donald Trump's Suggestion of Closer U.S.-Taiwan Ties Are 'Out of the Question'

Donald Trump suggested Sunday that the U.S. may not be bound in the future by the understanding that Taiwan is part of “one China” — casting doubt upon a concept that has been a key part of Sino-U.S. relations for decades, and threatening to send those relations into a tailspin.

On Monday, a Chinese Foreign Ministry spokesman said his government was “seriously concerned” about the President-elect’s comments, and that cordial development of ties “out of the question” unless that “political bedrock” of Sino-U.S. relations was maintained.

An earlier editorial in the state-linked Global Times was more strident, saying, “In response to Trump’s provocations, Beijing could offer support, even military assistance to U.S. foes.”

A Chinese-language version of that same article added that Trump was “like a child in his ignorance of foreign policy.”

China and Taiwan effectively split after China’s civil war in 1949, when routed Nationalists fled across the Taiwan Strait to the island. Since that time, Beijing has considered Taiwan a renegade province, to be reclaimed by force if necessary.

On Dec. 2, the U.S. President-elect angered the Chinese top brass by accepting a phone call from the President of Taiwan, the first direct contact between leaders of the U.S. and the self-governing island since formal diplomatic relations were severed in 1979.

Trump has been unrepentant about the call, and went further on this week’s Fox News Sunday by saying that the U.S. would only continue to recognize that Taiwan was part of China if significant concessions were wrested from Beijing.

Trump said China was not cooperating with the U.S. on its valuation of its currency, on denuclearizing North Korea and on resolving territorial claims in the South China Sea. He also said China should not be “dictating” whom he could speak to on the telephone.

According to Professor Wang Yiwei, director of the Institute of International Affairs at Beijing’s Renmin University, Trump’s remarks are likely an idle threat.

“I don’t think he will recognize Taiwan,” he tells TIME. “Maybe he’s trying to bargain more benefits regarding trade or the economy so he says very serious things about Taiwan to frighten the Chinese [leadership]. I think it’s his diplomatic strategy.”

Of course, Beijing’s reaction may be to strike back. Bilateral trade between the U.S. and China was valued at $558 billion last year, and China is the world’s largest holder of U.S. Treasury bonds — worth $1.19 trillion. Taiwan is even more reliant on China, which accounts for two-fifths of all its exports, bringing in some $130 billion each year.

“It’s super risky,” Professor Nick Bisley, an Asia expert at Australia’s La Trobe University, says of Trump’s gambit. “There’s a reason why political leaders haven’t done this in the past. Taiwan is the neuralgic issue — one above all others that the Chinese will react to.”

Trump made campaign pledges to brand China a currency manipulator and imposing a 45% tax on Chinese imports. The real estate mogul’s trade transition team is stacked with veterans of the U.S. steel industry’s battles with the world’s second largest economy, indicating a shift toward heavy enforcement to decrease the U.S. trade deficit.

However, according to Sheng Jiuyuan, dean of the Taiwan Research Center at the Shanghai Academy of Social Sciences, it’s Trump’s Taiwan comments that will have a “serious impact” on Sino-U.S. relations, as “one China” is the “cornerstone that maintains cross-straits stability.”

“Trump is using businessman’s trick to deal with a sensitive political issue,” he says. “But that might cause a confrontation between China and Taiwan. Trump will have to take responsibility should this happen.”

Chinese military aircraft have been spotted near Taiwan in recent days. More than 10 planes — including four electronic surveillance aircraft — conducted long-range exercises over the ocean between Taiwan and the Philippines, according to officials in Taipei. Experts say Beijing may be responding to speculation that the U.S. is trying to increase arm sales to Taiwan.

According to Bisley, Trump’s “swagger” in dealing with China has echoes of the Cold War strategy of former U.S. President Ronald Reagan, who significantly enhanced the American armed forces before engaging in negotiations with Soviet Russia. Trump promised on the campaign trail to boost military spending by an estimated half a trillion dollars.

“[Trump’s] saying, ‘Let’s try to be a bit more confident and a bit more bold about where the U.S. stands in relation to China,’” says Bisley. “The Chinese have been smart by not taking the bait. Because he’s not President Trump yet and U.S. foreign policy has not changed.” 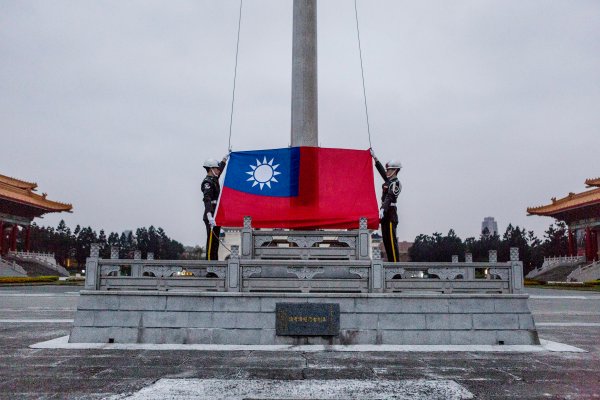 Trump's Doubting of 'One China' Sparks Hope and Fear in Taiwan
Next Up: Editor's Pick