She told her son it was her dying wish for him to perform on The X Factor, and on Saturday night, Louis Tomlinson took the stage of the popular U.K. competition program and gave an emotional performance in his mother’s honor — days after she passed away.

The 24-year-old singer returned to the show that made him a star with his One Direction band mates — this time launching his highly anticipated solo career with his new single, “Just Hold On.”

The song’s lyrics were particularly poignant after the loss of Tomlinson’s mom Johannah Deakin — who died from leukemia on Wednesday. The mother-of-seven was 43. After his performance, Tomlinson kissed his fingers and looked up to the sky.

“Oh until it’s all been said, it’s not over until your dying breath,” Tomlinson sang. “So what do you want them to say when you’re gone? That you gave up or that you kept going on? What do you do when a chapter ends? Do you close the book and never read it again?”

“Where do you go when your story’s done,” he continued. “You can be who you want or who you’ll become. Oh if it all goes wrong, oh darling just hold on. The sun goes down and it comes back up. The world still turns no matter what.”

Tomlinson’s bandmates — including former One Directioner Zayn Malik — attended the performance in a show of support for their friend.

Hours before his performance, Tomlinson broke his social media silence to thank fans for their support. “All the support has been incredible!” he tweeted. “Let’s do this together tonight.”

Tomlinson and Deakin were extremely close and she was thrilled by the birth of his son Freddie Reign in January, a source told PEOPLE.

“My mother looking gorgeous before the BRITS earlier this year,” he captioned one of the many Instagram shot of them — this one posted on Nov. 18. “I love you and miss you so much!”

According to a source, Deakin, a midwife, had been looking forward to Tomlinson’s appearance on the X Factor stage — and told PEOPLE that Tomlinson decided to proceed with the appearance in her honor.

“It is with immeasurable sadness that Johannah Deakin’s family said goodbye to Johannah in the early hours of Dec. 7,” the family said in a statement. “Earlier this year Johannah was diagnosed with a very aggressive form of leukemia that required immediate and continuous treatment. We respectfully request that the family are given time and space to grieve in private.”

“Johannah was first and foremost a truly amazing mother to seven children – Louis, Lottie, Félicité, and two sets of twins, Phoebe and Daisy and Ernest and Doris — whose individual talents and success are testament to the principles and beliefs she instilled in them,” Deakin’s husband Dan Deakin said in a statement. “She was also an incredibly proud grandmother to [Louis’ son] Freddie.”

“Incredibly selfless, she would always look to put other people before herself,” Dan continued. “She desired nothing more than for everyone around her to be happy and loving. She worked tirelessly on numerous charity campaigns, creating memories for many individuals and their families. It wasn’t uncommon for Johannah to hear through the media of an individual in need of assistance, and she would immediately make it her objective to get that person what they often desperately needed, and rarely without success. These are the things that made Johannah happy and content in life, and all of which for me made her simply the perfect wife and best friend to face each day with. I thoroughly loved walking through life with her, and though five years was far too short a time, during that time we had so many lifetimes worth of happiness, adventures, and memories.

“We would like to send our sincere thanks to Professor Steve Mackinnon and his team at University College London Hospital where Johannah was hospitalized since May,” he said. “And during the last few weeks Professor John Snowden and his colleagues at Royal Hallamshire Hospital Sheffield.”

After her death became known, Tomlinson’s former One Direction bandmates began reaching out to him on social media. Liam Payneshared a lengthy emotional message via Twitter.

“Louis, I’m so sorry for you my brother,” he wrote. “My heart aches for you. Just know I love you the same from a million miles away as I do right next to you. I’m always here for you through everything as you have been for me. My thoughts and prayers are with you and your family at this incredibly sad time. I can’t begin to imagine what you are all going through. RIP Johanna you are forever in my thoughts.”

“My heart breaks for you,” she wrote. “I am so sorry. My thoughts are with you and your loved ones at this incredibly tragic time.”

Bandmate Niall Horan offered his condolences. “Very sad news. Louis I love you mate and I’m / all of us are here for you all the way. [Your] mum was an incredible person. Thinking of you and your family. Love from my family to yours.”

He also received a kind message from Malik, a touching reminder that their friendship remains intact despite their professional split.

Simon Cowell — the media mogul, X Factor host, and mastermind behind One Direction — reached out too.

Tomlinson’s performance on Saturday quickly trended on social media with the hashtag #ProudofLouis, with fans continuing to send their love to Tomlinson after his loss.

The song, “Just Hold On,” was released after the X Factor performance. 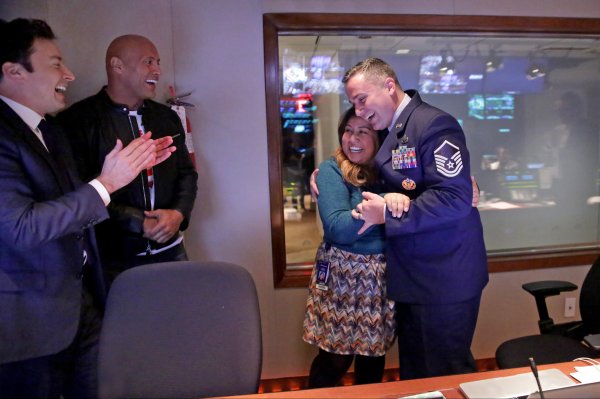 Watch Jimmy Fallon and Dwayne Johnson's Moving Surprise for a Military Family
Next Up: Editor's Pick