Everything You Need to Know About Santacon 2016

People dressed as Santa Claus and Mrs. Claus pose in Times Square as they gather for the annual Santacon festivities on Dec. 13, 2014 in New York City.
DON EMMERT—AFP/Getty Images
By Melissa Chan

Santacon, the annual pub crawl that lures out large groups of red-suited revelers dressed in Santa suits, is set to storm several major cities across the U.S. this weekend.

The spirited and popular event, which draws participants both naughty and nice, has been notoriously rowdy and sometimes loathed by locals, especially in New York City.

Dozens of cities in the U.S. take part in the celebration each year. Some of the events collect funds for charity or toys for children, although it’s unclear how much money Santacon has raised in the more than two decades since it was founded. (New York City’s Santacon says it has raised more than $200,000 for charitable causes.)

Here’s what to know about some of this year’s major festivities, whether you’re participating or avoiding the parties at all costs:

New York City
The convention comes to Manhattan this year, starting between 10 a.m. and 11 a.m. on Saturday. Santas are asked to gather at the Flatiron Building Plaza in Gramercy before the party moves to more than 50 participating bars in the East Village and then to Midtown around 5 p.m. Participants are encouraged to donate to charity and to “follow the Santa code,” which requires a full Santa costume and condemns debauchery. “Santa spreads joy, not terror. Not vomit. Not trash,” the code says, according to the event’s website. Taking the code one step further, the Metropolitan Transportation Authority will be banning alcohol on the Long Island Rail Road and Metro-North Railroad trains and stations during the event, NBC New York reports.

Boston
Merrymakers in Massachusetts are meeting Saturday at noon at the Game On bar in Fenway Park and hitting up more than a dozen locations before calling it a day around 10 p.m., according to the event’s Facebook page. It’s a similar route to last year’s event, which drew more than 2,000 wannabe Santas.

San Francisco
San Francisco is believed to have given birth to Santacon in 1994. Celebrants in the California city are gathering Saturday at noon and plan to keep the party going until 2 a.m. Sunday. Its organizers have created a map route and list of participating pubs here.

Chicago
The Windy City loves Santacon so much that it celebrates it twice. The first party falls on Saturday and features eight bars around Logan Square, according to the event’s official website. Festivities begin at noon and go until 7 p.m. with a dance party.

Austin
Bad Santas in Austin, Texas plan to paint the town red Saturday between 7 p.m. and 10 p.m. Organizers say activities include a “pub crawl, rampage, flash mob” and the “singing of naughty carols,” according to a Facebook page. More than 200 people are expected to attend. 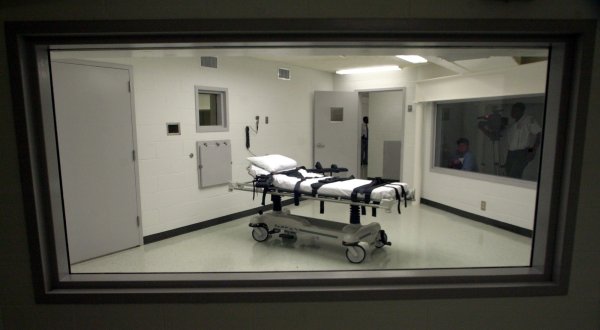 The Drug Used in Alabama’s Problematic Execution Has a Controversial History
Next Up: Editor's Pick