If you’d like to be reduced a puddle of emotions and tears, please watch this heartwarming video of two Chicago Bulls fans getting engaged during a Bulls home game against the Spurs on Thursday.

Jake Conrad proposed to his boyfriend Michael Holtzman during a timeout with a little help from mascot Benny the Bull, the Chicago Luvabulls dancers, and the Chicago Bulls franchise.

According to a statement sent to Outsports from Bulls spokesman Ross Lipschultz, Conrad wanted to surprise Holtzman, a diehard fan of the team, by proposing before the game. However, the Chicago Bulls were “so touched” by the pair’s love story that they asked Conrad if he was open to proposing during the game.

“Once Jake agreed, the team worked with him to set up a proposal during a timeout involving Benny the Bull and the Luvabulls,” Lipschultz wrote. “The Chicago Bulls are honored to have been part of such a special moment for this couple.”

Conrad proposed with a ring pop to wild cheers from the crowd while Bulls legend Scottie Pippen was on deck to help the happy couple celebrate.

While proposals aren’t uncommon during NBA games (even Gucci Mane loves a good courtside proposal,) this is one of the first same-sex proposals in the franchise; previously, two women got engaged during an Atlanta Hawks game. 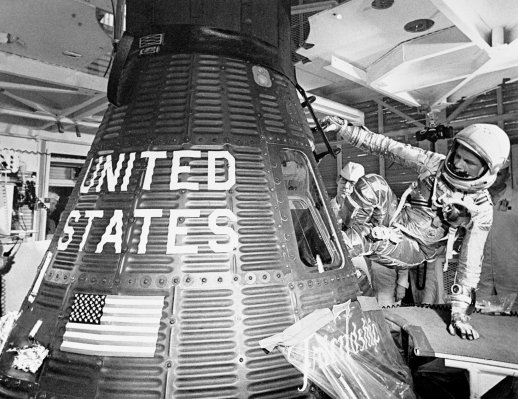 Astronaut John Glenn Was the First Person to Eat in Space
Next Up: Editor's Pick