A chunk of amber - fossilized resin - shows the tip of a preserved dinosaur tail section in this image released by the Royal Saskatchewan Museum in Canada on Dec. 8, 2016.
R.C. McKellar—Saskatchewan Museum/Reuters
By Kate Samuelson

Palaeontologists have discovered a 1.4-inch dinosaur’s tail, complete with delicate feathers, bones and soft tissue, preserved in amber. The lump of resin was recovered at an amber market in northern Burma near the Chinese border, where it was destined to become jewelry. It originally came from a mine in the Hukawng Valley in Kachin state.

According to CNN, Burmese traders selling the plum-sized piece believed a plant fragment was trapped inside. But research into the specimen, led by paleontologists Lida Xing of the China University of Geosciences, revealed that it contained a 99-million-year-old feathered dinosaur tail.

The findings, which have been documented in the December issue of Current Biology, are expected to help scientists gain a better understanding of the evolution and structure of dinosaur feathers.

“The more we see these feathered dinosaurs and how widespread the feathers are, things like a scaly velociraptor seem less and less likely and they’ve become a lot more bird like in the overall view,” Ryan McKellar, a paleontologist at the Royal Saskatchewan Museum in Canada and co-author of the paper, told CNN. He added that the discovery was a “once in a lifetime find.” 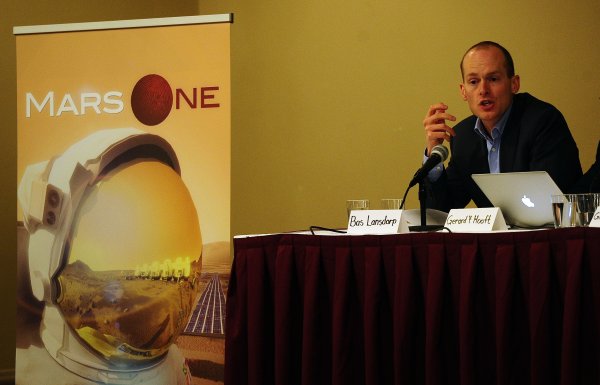 Mars One Delayed Its Mars Mission Once Again
Next Up: Editor's Pick