Following six weeks of street protests and an approval rating that plunged to just 4%, South Korean President Park Geun-hye was impeached Friday by the nation’s National Assembly, signaling an ignominious end to a term that had become mired in a corruption scandal.

The impeachment vote required at least 28 of Park’s fellow Saenuri Party lawmakers to cross the aisle to make up the majority two-thirds of the 300-seat legislature. The final vote was 234 to 56 in favor of impeachment. Park is suspended with immediate effect although the vote needs to be ratified by the nation’s Constitutional Court within 180 days to become permanent.

The nation’s Prime Minister takes over Park’s responsibilities in the interim, though Park had already offered to resign if lawmakers voted against her. If she does, new elections must be held within 60 days. Crowds of banner-waving protesters greeted the verdict with cheers outside the chamber.

“President Park Geun-hye has not only forgotten her duty as the nation‘s leader and administrative chief but also violated the constitution and other laws concerning her public duties,” said opposition lawmaker Kim Kwan-young while presenting the impeachment bill.

Park is the 64-year-old daughter of former South Korean military dictator Park Chung-hee, who is credited with spearheading the East Asian nation’s rapid economic growth of the 1970s and ’80s. She is accused of sharing classified documents with her longtime confidante, Choi Soon-sil.

Choi, the daughter of the shaman-like cult leader who grew close to Park and her strongman father, has been charged with using her influence over Park to wrest almost $70 million from some of South Korea’s biggest companies, including LG, Hyundai and Samsung.

Crowds between 500,000 to 1.5 million have thronged central Seoul in recent weeks to demand Park’s ouster. Protesters see the corruption scandal as symptomatic of wider problems in South Korean society, including soaring income inequality, ingrained sexism and a lack of social mobility.

Park has yet to resign or formally comment on her impeachment and has not been seen in public since Tuesday, instead ensconcing herself in the presidential Blue House despite the roiling demonstrations less than a mile away. “She really has been very tone-deaf to what the people want,” says Professor Sean O’Malley, a political scientist at South Korea’s Dongseo University.

As President, Park is constitutionally protected from prosecution other than for insurrection or treason, though prosecutors say she had a “considerable” role in Choi’s alleged transgressions. There are widespread calls for criminal charges against Park once she leaves office. Park has apologized for the scandal three times but insists nothing she did was for personal gain.

“My heart is crushed when I think I cannot resolve the deep disappointment and anger of the people even if I apologize 100 times,” she said in one tearful televised statement.

South Korea now faces a damaging period of political limbo. Prime Minister Hwang Kyo-ahn is deeply unpopular among the opposition and protesters, who see him as too close to Park’s scandal-hit administration. The lack of clear leadership has consequences for regional security, with Seoul a vital ally to Washington’s efforts to curb the nuclear ambitions of rogue state North Korea.

However, O’Malley says there are signs the Choi scandal has had the positive effect of empowering the national prosecutors’ office. “I’m hopeful that they will be more aggressive in pursuing political corruption cases in the future,” he says, adding that the saga “may strengthen the legal system in the long run.” 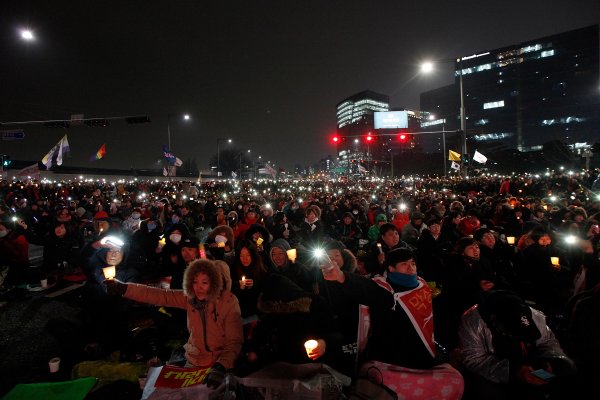