Paula Broadwell Is ‘Shocked’ Petraeus May Get Big Trump Role

Paula Broadwell, a writer and former military intelligence officer, became a public figure in 2012 when her affair with then-CIA director David Petraeus became public. In a new interview with CBS This Morning, Broadwell said it was a “shocker”that the retired general could soon be tapped for Secretary of State under president-elect Donald Trump. Broadwell expressed a desire for Petraeus to be able to go on with his life, but also wondered why she hadn’t been permitted to do the same.

In the wake of the scandal, Broadwell – who served 21 years in the military and 13 in the Army Reserves – says she was demoted, formally reprimanded and stripped of her security clearance. Though the military did not formally discipline Petraeus, he resigned from his job and was fined $100,000 and sentenced to probation in a civilian criminal court for sharing classified information with Broadwell, who was working as his biographer at the time. He recently joined the ranks of a number of generals whom Trump is considering for cabinet positions. Broadwell declined to say whether she believed Petraeus is qualified to be Secretary of State, but alluded to the vast discrepancies in consequences each had faced after the affair.

“I think he’s unequally qualified for many positions, but that’s not my position to say. I think the president-elect would have to decide and members of the Senate,” Broadwell said. “As I woke up to the news, you know, it was a bit of a shocker that he was being considered for a Cabinet position, and I was — I was both shocked that I’m still in this tenuous position, and yet happy because I think he should be able to go on with his life. He’s earned it, and so should his family. But then it begged the question of, ‘Why shouldn’t I be able to go on?’”

Broadwell told CBS she’s currently waiting for her resignation paperwork to be approved. After years of silence, she said she’d tired of taking everyone’s advice to lie low, and that she granted the interview because she felt it was time to begin fighting back and reclaiming her narrative. Her arc here is actually somewhat reminiscent of that of Monica Lewinsky, who made very similar remarks when in 2014 she re-emerged as a Vanity Fair columnist following more than a decade of silence after her brief affair with then-President Bill Clinton. 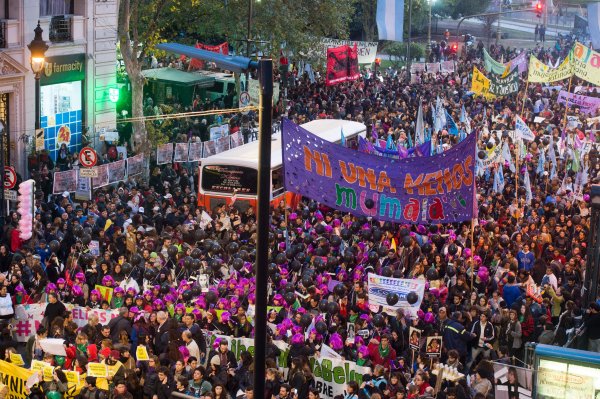 Catcalling Is Now Punishable by a Fine in Buenos Aires
Next Up: Editor's Pick