Since 9/11, the nation has embraced militarization as a way of preventing another major terror attack like the one 15 years ago that killed 2,996 people. Barricades have gone up around public buildings—there are now five fences or walls along the south side of the White House. Military recruiting stations across the nation are being retrofitted with bulletproof glass. And police departments across the country have reinforced their arsenals with Pentagon castoffs, including massive armored vehicles, rolling command posts and grenade launchers.

But the startling images in 2014 of local police looking like heavily-armed soldiers in Ferguson, Mo., after the death of a black teenager shot by a white policeman, led local officials returned much of the surplus Pentagon gear.

So it’s fair to ask if President-elect Trump’s recent moves to stack his Administration with recently-retired generals is headed down the same path. Military historians say there has never been a time in modern U.S. history when a prospective commander-in-chief is considering so many generals (and admirals) for top jobs in his Administration. There’s concern their presence could erode the tradition of civilian control of the U.S. military.

“Too many generals in top spots risks having many primarily military perspectives outweigh civilian voices on issues that require a sound balance of both,” cautions Dave Barno, a retired Army lieutenant general. “That said, most all of the generals being interviewed by Trump would add unquestioned gravitas and hard-won, common-sense knowledge about the world to his new team that should be welcomed by all Americans.”

There is a hunger for those attributes. “I think Americans these days really want government to work,” says Charles Dunlap, a retired Air Force major general. “Given that the military is the institution in our society in which they have the most confidence, I don’t think there will be much pushback from the general public if there are several retired officers filling civilian, politically-appointee leadership roles.”

Trump, who never served in the military and who has few foreign-policy chops, is packing his Administration with those who have spent decades saluting and carrying out orders. The growing list includes retired four-star Marine James Mattis to run the Defense Department (an appointment that will require waiving a law that the U.S. military’s civilian chief be out of uniform for at least seven years), retired Marine general John Kelly at the helm of the Department of Homeland Security, and retired Army lieutenant general Michael Flynn, to serve as national security adviser. Trump is also considering retired Army general David Petraeus and retired admiral James Stavridis to serve as Secretary of State, and Navy Admiral Mike Rogers, who remains on active duty as head of the super-secret National Security Agency, as the director of national intelligence—the nation’s top spy.

But old soldiers are not martial automatons, responding reflexively to civilian commands. By the time an officer wears four stars, he or she has spent years dealing with major strategic issues. Such experience—especially in national-security matters—should prove invaluable to a President with little such background. They are far more likely to act as a brake on hare-brained notions—from Trump or anyone else—than a gas pedal, current and former U.S. military officers say. And Trump has shown a willingness to listen. After the President-elect said he might resume waterboarding suspected terrorists, Mattis made him rethink its wisdom by telling him he’d get more out of them with “a pack of cigarettes and a couple of beers.”

The one outlier among the retired senior officers in Trump’s orbit appears to be Flynn, an early supporter of Trump’s campaign. Trump wants Flynn to serve as his national security adviser (a position, unlike the others, that does not require Senate confirmation). Flynn has long had a reputation as an outspoken officer, but that has been causing him trouble lately. In one tweet just before the election, Flynn passed along a link to a false Hillary Clinton sex story:

He also has been criticized for not publicly rebuking his son’s tweeting Sunday about a different, and also unfounded, Clinton sex tale:

This troubles Barry McCaffrey, a retired four-star Army general who originally endorsed Flynn for the White House post (Trump booted the younger Flynn from his transition staff on Tuesday because of the tweet). The national security adviser “is one of the five most powerful positions in the nation,” McCaffrey said Thursday. “If he’s not able to immediately denounce that kind of demented story, there’s something wrong and we need to examine his suitability for public office.” 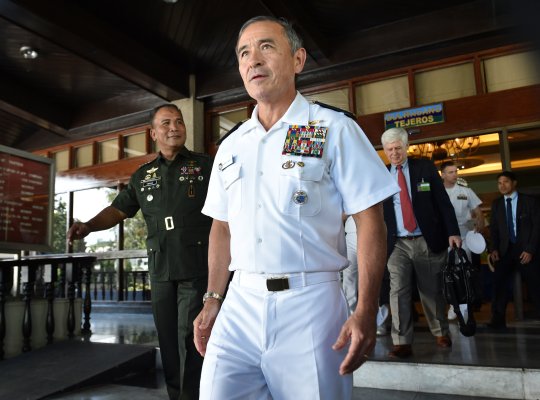 Top Navy Brass Takes Dig at Colin Kaepernick and Gets Standing Ovation
Next Up: Editor's Pick