Why the Cassini Spacecraft Will Soon Commit Suicide

It’s been a long, long time since anyone got a look at the Cassini spacecraft—nineteen years, one month and 22 days, actually, depending on how you’re counting. That was how long ago it was that the six-ton spacecraft, tucked inside the upper stage of a Titan IVB rocket, left the launch pad on the east coast of Florida and headed out on a spiraling journey through the solar system toward Saturn.

It would be another seven years before it arrived, settling into Saturnian orbit in the summer of 2004—when the raging presidential contest was between George W. Bush and John Kerry; when the iPhone didn’t exist but the iPod did; when when a little-known English girl named Adele was 16 years old. In the 12 years since, Cassini has made 251 one orbits of Saturn, sweeping over its cloudtops, barnstorming its moons, even firing a probe into the atmosphere of the largest of those moons, Titan.

Now, the clock is running down. Cassini has less than a year to live, but its concluding months are set to be its greatest, its most productive, and easily its most harrowing. Just this week, that final adventure began.

Of all of Saturn’s gaudy features, it is its rings that are the most conspicuous, but Cassini has had approach them only warily. Saturn’s 62 moons have fixed dimensions and known mass and even from a distance of 750 million miles, NASA engineers know exactly how to get close to them but not too close. Saturn’s rings, however, are more complex, a series of 10 complete bands and two incomplete arcs, made up of billions of drifting rock, dust and ice particles. Any one of those orbiting bits could disable a high-speed spacecraft that drew too close.

Now, however, Cassini is running out of fuel and NASA is willing to take more chances. On November 30, the spacecraft thus began the first of what will be 20 so-called ring-grazing orbits, each lasting a week. The orbits are exactly what they sound like they are, and four days after the first one began, Cassini grazed the rings indeed, buzzing the outermost F ring at a distance of just 6,800 miles (11,000 km) which is almost nothing at all on the scale of space.

During that initial pass, most striking images Cassini sent home were not of the rings themselves but of the north Saturnian pole and its odd hexagonal cloud formation, thought to be the result of interactions between polar jet streams and the planet’s rotation. Plenty of pictures of the rings themselves, however—in unprecedented close-up—will be beamed home in the 19 grazing orbits to follow, the last of which will occur on April 19, 2017, at precisely 5:44 PM spacecraft time, which is also Greenwich Mean Time.

“It’s taken years of planning, but now that we’re finally here, the whole Cassini team is excited to begin studying the data that come from these ring-grazing orbits,” said Linda Spilker, a Cassini project scientist, in a NASA statement. “This is a remarkable time in what’s already been a thrilling journey.”

Even when the ring-grazing orbits are done, there will be still-greater thrills to come, when Cassini begins what NASA is calling, without much hyperbole, its Grand Finale. That mission phase will involve 22 more orbits during which the spacecraft will fly through the narrow 1,500-mile (2,400-km) gap that separates Saturn itself from the innermost rim of its innermost ring. So close to the ring will those thread-the-needle dives be, that the spacecraft will fly with its 13-ft wide (4 m) high-gain antenna facing forward, so that it can act as a shield to protect the sensitive instruments behind it against high-speed particle collisions.

Finally, on September 15, 2017, when the 22nd of those orbits is done, Cassini will commit a carefully engineered suicide. One of Saturn’s moons—Enceladus—is known to be home to a subsurface ocean of liquid water, and where there is liquid water there could be life. NASA does not want to take the risk of an accidental collision that could allow Cassini to contaminate Enceladus with traces biological material from Earth. To prevent that, the spacecraft will make a final plunge into Saturn’s clouds, radioing back data—as it has since 1997—until the massive pressure of the Saturnian atmosphere crushes it to death. In a finish that could not be more fitting, the spacecraft that spent a dozen years orbiting Saturn will forever become a part of Saturn. 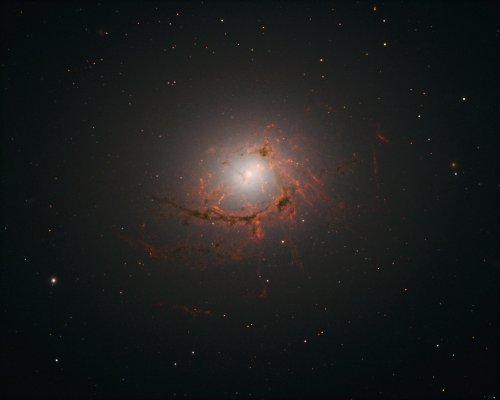 See This Magnificent Galaxy in More Detail Than Ever Before
Next Up: Editor's Pick