The Jury's Out on Obama's Terror Fight

If you said on Sept. 12, 2001, that there wouldn’t be another major terror attack on U.S. soil over the next 15 years, most Americans wouldn’t have believed you. Yet, that’s just what has happened. Following the deaths of 2,996 people on 9/11, there has been a flurry of terror attacks—the biggest one killing 49 at an Orlando nightclub in June—but nothing like the horror visited on New York City, the Pentagon and a Pennsylvania field.

Politicians like to take credit for pretty much anything, so it shouldn’t come as a surprise that President Obama defended his counter-terrorism record in a speech Tuesday. It is likely to be the last major speech on national security of his presidency.

“No foreign terrorist organization has planned and executed an attack on our homeland in the last eight years,” he said at MacDill Air Force Base in Tampa, Fla. “And it is not because they didn’t try.” The base is the central hub of the U.S. war on terror: U.S. Central Command, which is running the wars in Afghanistan and Iraq, and U.S. Special Operations Command, which killed Osama bin Laden, are both headquartered there. The summing-up speech has been in the works for months, and is unrelated to Donald Trump’s election last month, White House officials said.

But, after 9/11, there also were no major terror attacks inside the U.S. during the remaining seven years of President George W. Bush’s Administration.

Bush launched two wars to defeat terrorism, while Obama pushed to wind them down. Does their mutual success signal wise U.S. military decisions? Or does it indicate that the 9/11 attack—the al Qaeda hijackers used American weapons against American targets—was a one-off event that has become far more difficult to duplicate as the U.S. tightened its defenses?

The answer, of course, is that the nation’s success in combating terrorism since 9/11 is due to a bit of both. In Afghanistan, Bush pounded al Qaeda and the Taliban government that gave it sanctuary. Then he invaded Iraq, juggling two wars and winning neither. It was on Obama’s watch that the war on terror—a phrase Obama dislikes—downshifted into a worldwide, but quieter, campaign. It has consisted largely of drones strikes and clandestine military attacks that can be sustained, perhaps indefinitely. He got the supreme satisfaction of telling the nation on the night of May 2, 2011, that “the United States has conducted an operation that killed Osama bin Laden.” But the rise of ISIS in Iraq and Syria has forced Obama to backpedal, and redeploy 5,000 troops to the region to “destroy” the self-declared Islamic caliphate.

When it comes to the war on terror, the question that will outlive the Obama presidency is: did he do enough? Most of the smaller terrorist attacks on U.S. soil since 9/11 are so-called “lone wolf” attacks, generally carried out by radicalized Americans and very hard to stop. As President, Obama has rarely stepped up into the bully pulpit traditionally used by wartime commanders-in-chief to rally public support. But these aren’t traditional wars, Obama has noted. He has taken the long view—that the fight against Islamic extremism is going to be more marathon than sprint—and that a steady, persistent campaign will eventually crush such terrorists.

Yet some analysts argue that by adapting a less forward-leaning U.S. approach, the world has grown more dangerous on Obama’s watch. The rise of ISIS has unnerved nations around the world, and triggered refugee flows that has sent cracks deeper into European fault lines. Both Russia and China are expanding their spheres of influence without significant U.S. pushback. North Korea keeps firing missiles, and Iran—despite 2015’s nuclear accord—shows little sign of reforming its theocratic ways. Libya has turned violent, and largely ungoverned, since the U.S. and NATO helped Libyan rebels remove longtime dictator Muammar Gaddafi in 2011. All of these places can turn into incubators for terror.

“President Obama’s speech was nothing more than a feeble attempt to evade the harsh judgment of history,” Sen. John McCain, the Arizona Republican who chairs the armed services committee and ran against Obama in 2008, said. “But to the American people, our emboldened enemies, and our dispirited allies, his legacy on counterterrorism is unmistakably clear: a disastrous withdrawal from Iraq, the terrorist rampage of [ISIS], an indecisive approach to the war in Afghanistan that has empowered the Taliban, and an indifferent approach to the carnage in Syria on which our terrorist enemies have thrived.” Several hours before Obama spoke, McCain said it’s time for a change in U.S. counter-terrorism policy. “When our next President is inaugurated just six weeks from now,” he said at a hearing on the global threats facing the U.S., “he will look at out on the world on fire and have several consequential strategic choices to make.”

President-elect Trump has scant foreign-policy experience, and his advisers are telling him to take a tougher line with Tehran. Yet given the relatively low-grade fever that terrorism has become, the nation is in no mood to launch a third war requiring years of fighting and thousands of American deaths. But Trump doesn’t have to choose between the separate paths blazed by the two Presidents who came before. His challenge will be to meld the best of both into a policy that keeps Americans safe on his watch, too. 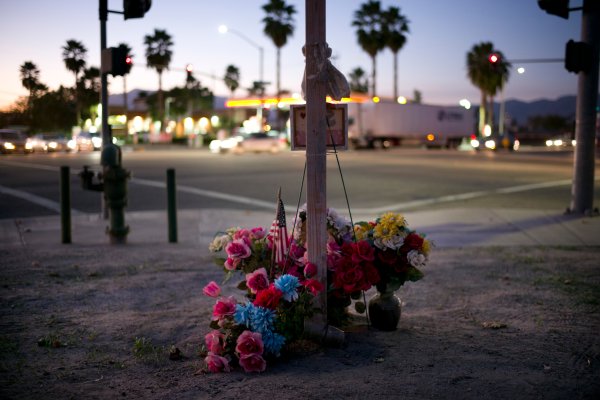 5 Things We Still Don’t Know a Year After the San Bernardino Shooting
Next Up: Editor's Pick