Google Is Going All In on Renewable Energy

The new Google logo is displayed at the Google headquarters on Sept. 2, 2015 in Mountain View, California.
Justin Sullivan—Getty Images
By Justin Worland

Google expects to purchase enough renewable energy to cover its entire operation for the first time ever next year, the company announced Tuesday.

The company will purchase about 2.6 gigawatts of wind and solar energy annually (enough to more power more than 1 million homes) to power its office and data center operations around the globe. The nature of the electric grid means the company cannot ensure that its facilities only use renewable energy, but the company contracts with renewable producers to add wind and solar capacity to the grid. This means that Google’s consumption does not result in any increase in electricity use from fossil fuels.

Google’s announcement is the latest indicator of how quickly renewable energy sources have become a competitive alternative to fossil fuels. The cost of solar power per unit of electricity, for instance, is now 1/150th of what it was in the 1970s and costs the same as electricity produced from coal and natural gas fired plants in many places, according to a Bloomberg report. Gary Demasi, the company’s director of global infrastructure and energy, said that when the company’s executives first set a 100% renewable target in 2012 they had no idea how quickly they could achieve it.

“The cost curve has been coming down regardless,” he says. “We didn’t know it would come down so quickly.”

Google, whose data centers across the globe consume large quantities of energy, explained the choice to go renewable as a business decision first and foremost. Contracts to purchase renewable energy help the company avoid the highly-variable costs of fossil fuels that affect the bottomline of other energy-intensive industries.

Beyond business concerns meeting the renewable target will also delight environmental groups that have called on corporations to help make up the gap between government commitments to reduce carbon dioxide emissions and the level scientists say is needed to address climate change. More than 80 large companies including the likes of Facebook, Nestle and Walmart have promised to go 100% renewable in the coming years. Data from the Climate Group, which organizes a coalition of companies pursuing 100% renewable energy, suggests that if all companies made such a pledge global carbon dioxide emissions would fall by as much as 15%. 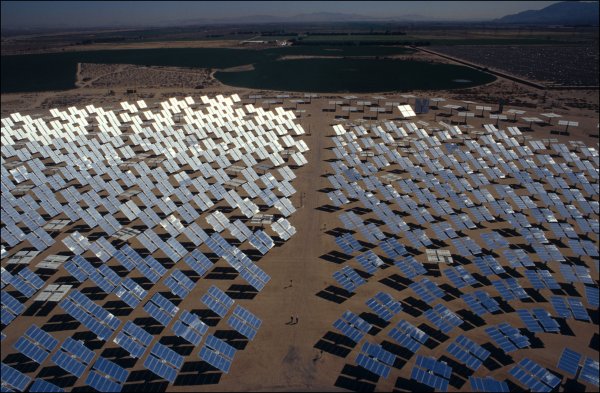 Robert Redford: Solar Power Must Continue to Be Affordable
Next Up: Editor's Pick