“Donald Trump has a long history of sensitive spot-touching,” Stephen Colbert quipped during the opening monologue on The Late Show on Monday night before targeting the president-elect’s pursuit of foreign policy priorities.

Colbert joked that the president-elect hit China’s “sensitive spot” by accepting a phone call from Taiwan President Tsai Ing-Wen. (Beijing still claims Taiwan is a renegade province to be reclaimed by force if necessary.)

As China is one of the U.S.’s biggest trade partners, long-established U.S. foreign protocol makes this phone call erratic. Colbert was not surprised that Trump prompted consternation among powers, and dispensed some advice to the incoming president: “Here’s an easy way for Donald Trump to remember which China we talk to. Sir, it’s the one where they make your ties.”

Colbert thinks Trump was driven to accept the phone call because he wants praise for winning the election: “He apparently will take any congratulatory call,” said Colbert. “Doesn’t matter who it’s from. ‘Uh, Mr. Trump, we have a couple well-wishers on the phone. It’s Robert Mugabe, Joran van der Sloot, and the guy who shot Harambe.’ ‘Put them through.’” 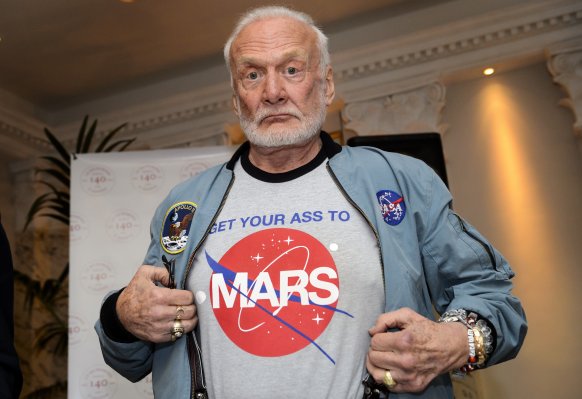 'Starman' Buzz Aldrin Is Being Cared for by Dr. David Bowie
Next Up: Editor's Pick