In the mid-20th century, General Tso’s chicken was invented. Over ensuing decades, a series of serendipitous events made it among the most popular Chinese dishes in the U.S.

Peng Chang-kuei, the inventor, died on Nov. 30 in Taipei. The chef, who had two children from a marriage in mainland China and five from a second marriage in Taiwan, was 97 years old by Western reckoning.

He was born in September 1919 in Hunan province. As a teen, he apprenticed under revered chef Cao Jingchen before achieving prominence himself by World War II. In 1949, he left mainland China for Taiwan, traversing 800 miles across the South China Sea. In Taiwan, he prepared government banquets and other high-profile feasts.

His background influenced his culinary risk taking. Sitting in one of the family’s restaurants in Taipei, Peng’s son Peng Tie-chen (a.k.a. Chuck), who is 63 years old but appears 15 years younger with a full head of jet black hair, says, “He personally saw a lot in China with World War II.” Consequently, he invented many dishes while in Taiwan. “Every dish incorporates his background story,” Chuck tells TIME.

General Tso’s chicken has its own story.

During the height of the Korean War in the early 1950s, Peng catered a three-day banquet for General Douglas MacArthur and his troops in Taiwan. It was an important event and Peng needed to alter the menu daily, so he experimented and created General Tso’s chicken — named after a Hunanese general whose name is also rendered as Zuo Zongtang. He lived from 1812 to 1885, quashed the Taiping Rebellion, and made contributions to agriculture, education and science.

Peng brought the recipe with him when, uneasy at Taiwan’s ongoing tensions with mainland China, he emigrated to New York City in 1973. He opened a restaurant on 44th Street, between Second and Third Avenues. Owing to the restaurant’s proximity to the U.N. headquarters, Taiwanese diplomats often hosted events there.

In 1977, Kissinger held his own high-profile banquet at Peng’s. It was a very unusual choice. “He should have held the event at a higher-end establishment, not a small Chinese restaurant,” says Chuck. Television and print journalists were curious and covered the event. This introduced Peng’s to America.

In 1977, Mimi Sheraton of the New York Times wrote, “[Peng’s] is among the city’s better choices at which to sample this enticing and interesting branch of Chinese cookery … General Tso’s chicken was a stir‐fried masterpiece, sizzling hot both in flavor and temperature.”

Peng opened restaurants in Atlanta, Houston, Los Angeles and San Francisco. Celebrities and movers such as Patrick Swayze and I.M. Pei, the architect behind the Louvre Pyramid, frequented them. In Houston, Chuck waited on former President George H.W. Bush and many NBA players including greats like Ralph Sampson.

In this 2008 photo, chef Peng Chang-kuei poses for a photo as he is seated at a table in his restaurant Peng's Garden in Taipei. The chef, who has been credited with inventing General Tso's chicken, a world-famous Chinese food staple that is not served in China, died in Taiwan on Nov. 30 at the age of 98
Chiang-Zhong Su—AP

Chinese restaurants popped up all around the U.S. and today, by one estimate, they outnumber McDonald’s, Burger King, KFC and Wendy’s combined. General Tso’s chicken became a menu staple, often with sugar added for American palates.

Peng returned to Taiwan in 1983, when officials there encouraged celebrated citizens to repatriate, believing it would strengthen the island’s stature on the world stage.

Although his health was deteriorating, Peng still cooked up until a few years ago. According to Chuck, his father would watch others cook and say, “You don’t know how to do it. I’ll do it myself.”

Over six and half decades, Peng’s original recipe has changed little. It has less batter and is less sweet and crunchy than American versions, but more oily, salty, tart and spicy.

The recipe calls for chicken legs to be marinated in cornstarch, egg and soy sauce. The chicken is then cooked at extremely high temperatures until the outside is crispy and the inside still juicy. Then a mixture of garlic, dried chili, white vinegar and sesame oil medley is added. The dish is served with white rice.

At no point did Peng think of giving his own name to the dish that had become so famous. “We are commoners, so to use the family name would have been highfalutin,” Chuck says.

There’s also the luck of the draw. His father created many dishes and did not realize that General Tso’s chicken would become the most popular the world over. “I feel very honored because it is popular in the U.S. and had such a big impact,” Chuck says. But yes, looking back, the family would do things differently.

“If we patented General Tso’s chicken,” Chuck says with a smile, “we’d be extremely rich.” 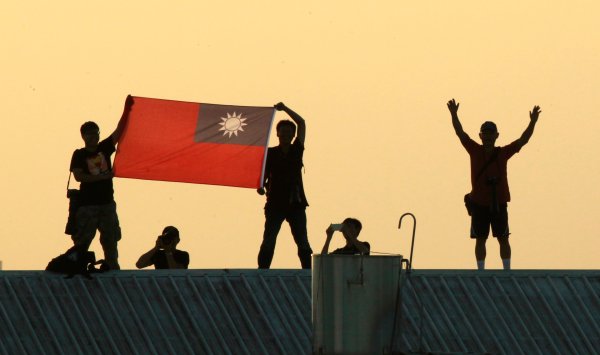 On Taiwan, Donald Trump Lays Down the Gauntlet to China
Next Up: Editor's Pick