The sign for the Comet Ping Pong restaurant is seen in Washingon, DC, on December 5, 2016.
Nicholas Kamm—AFP/Getty Images
By Mahita Gajanan

The man arrested for firing an assault rifle inside a Washington D.C. pizza shop told authorities he was armed to help rescue child sex slaves he thought were being held in the restaurant, according to a criminal complaint.

Edgar Welch, 28, walked into Comet Ping Pong on Sunday with an assault rifle, saying he wanted to investigate false claims that the pizza join was running a pedophile ring helped by Bill and Hillary Clinton from its basement—a fake news story now known as ‘Pizzagate,’ that has affected the restaurant for weeks.

Welch, believing the fake allegations that the Clintons used the restaurant as a front for a pedophile sex ring, kidnapping and trafficking, pointed his rifle at a restaurant employee. He later fired his gun into the floor.

According to a criminal complaint, obtained by the New York Times, Welch told officers he read online that Comet Ping Pong was “harboring child sex slaves and that he wanted to see for himself if they were there.” Welch told police he was “armed to help rescue” the children.

He surrendered peacefully to police “when he found no evidence that underage children were being harbored in the restaurant,” the complaint said.

Comet Ping Pong has been the center of Pizzagate, and the restaurant staff and owner have received hundreds of death threats over social media. The fake story, which developed after emails from restaurant owner James Alefantis to Clinton campaign chairman John Podesta were released by WikiLeaks earlier this year, spread quickly on 4Chan, Reddit, and Twitter, along with several fake news websites. 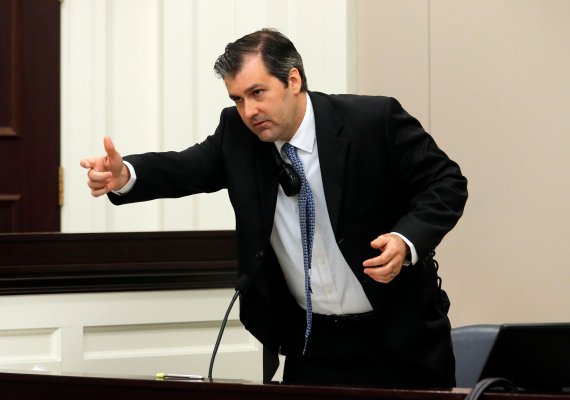 A Murder Conviction in the Walter Scott Case Seemed Like a Sure Thing. Here’s Why It Wasn’t
Next Up: Editor's Pick