Here's What You Need to Know About James 'Mad Dog' Mattis, Trump's Pick For Secretary of Defense

Retired Marine general James “Mad Dog” Mattis is President-elect Donald Trump’s pick to become Secretary of Defense. The next commander-in-chief is betting that Congress will give the tough-talking leatherneck the waiver he needs to run the Pentagon well short of the seven-year ban on retired military officers serving as the Pentagon’s civilian boss.

“We are going to appoint ‘Mad Dog’ Mattis as our Secretary of Defense,” Trump to a rally Thursday night in Cincinnati.

Early indications from Capitol Hill suggest Congress will exempt Mattis from the ban on a retired military officer serving as Defense Secretary until he has been retired for at least seven years.

“He is without a doubt one of the finest military officers of his generation and an extraordinary leader who inspires a rare and special admiration of his troops,” said Senator John McCain, the Arizona Republican who chairs the armed services committee and will conduct Mattis’ confirmation hearing. McCain made it clear that, to him, the ban is a non-issue. “America will be fortunate to have General Mattis in its service once again,” he said in a statement.

A 66-year-old lifelong bachelor, Mattis spent his final years in uniform as head of U.S. Central Command from 2010 to 2013, responsible for the arc of crisis stretching from Egypt to Afghanistan. His hawkish views toward Iran, Pentagon officials say, led the Obama Administration to ease him out of that sensitive post and into retirement.

Mattis has returned the favor. In August, he told TIME that the Administration’s war on ISIS has been “unguided by a sustained policy or sound strategy [and is] replete with half-measures.”

“Jim Mattis a warrior-monk-intellectual,” says Barry McCaffrey, a retired four-star Army general, adding that Mattis “would badly scare the enemies of the United States.” Mattis was — and still is — loved by his fellow Marines, who revere him as much for his willingness to endure hardship as his pithy quotes: “Be polite, be professional, but have a plan to kill everybody you meet.” He also is known to pack a copy of Marcus Aurelius’s Meditations.

“This is a great pick, but it’s vitally important that he be paired with a deputy deeply schooled in budget and procurement processes,” adds Charles Dunlap, a retired Air Force major general now teaching law at Duke University.

During his 44 years in uniform, part of Mattis’ attraction was his willingness to offer his unvarnished, and sometimes, impolitic, opinions. “You go into Afghanistan, you got guys who slap women around for five years because they didn’t wear a veil. You know, guys like that ain’t got no manhood left anyway,” Mattis said in 2005. “So it’s a hell of a lot of fun to shoot them.”

But Dunlap cautioned that Mattis may be in for a surprise when he swaps his uniform for a suit. “I believe that some retired generals are less politically astute than they think they are, and they may not fully appreciate the polarized environment they are diving into,” he says. “When an officer takes the uniform off and dons the politician’s attire, much of the deference and even some of the hard-earned respect goes with it. “

When Congress created the position of Defense Secretary, along with the Department of Defense, in 1947, it said that a military officer would have to be out of uniform for seven years before becoming eligible for the job. Mattis retired from the corps in May 2013, leaving him more than three years short of meeting that requirement, which was instituted to ensure civilian control of the military.

President Truman sought, and won, from Congress an exception when he nominated George C. Marshall to run the Pentagon in 1950. The five-star Army general had already served as Secretary of State when Truman asked him to run the U.S. military in the dark early days of the Korean War. In giving Marshall’s appointment a green light, Congress made clear it was granting a one-time waiver. 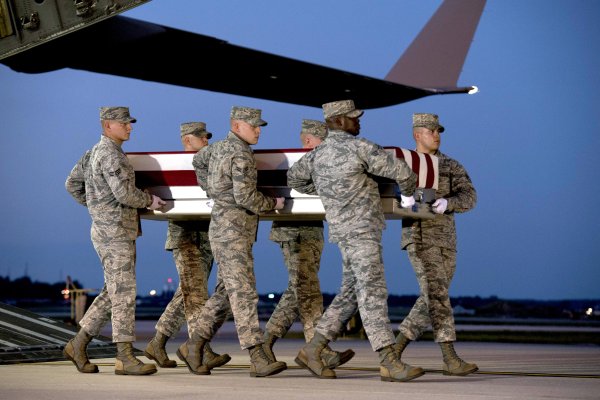 An American Hero Comes Home, at Last
Next Up: Editor's Pick