Donald Trump spoke at the Carrier plant in Indianapolis on Thursday, announcing a deal with the company to keep about 1,000 jobs in the state instead of moving them to Mexico.

The decision by the air-conditioner company comes as a win for the President-elect, who made the issue of retaining manufacturing jobs in the United States a core economic focus of his campaign. Trump has said he will overhaul the corporate tax code to be more friendly to businesses like Carrier, and the company will receive economic incentives worth $7 million, which were negotiated by Vice President-Elect Mike Pence, who is still governor of Indiana, according to the New York Times.

Despite the deal with Trump, Carrier still plans to close a plant in Huntington, Indiana, which will result in about 700 jobs moving to Mexico, NBC reported Thursday.

Trump was confident in his victory tour on Thursday, presenting a strong message to companies who want to outsource jobs in the future. “There will be consequences,” he said. 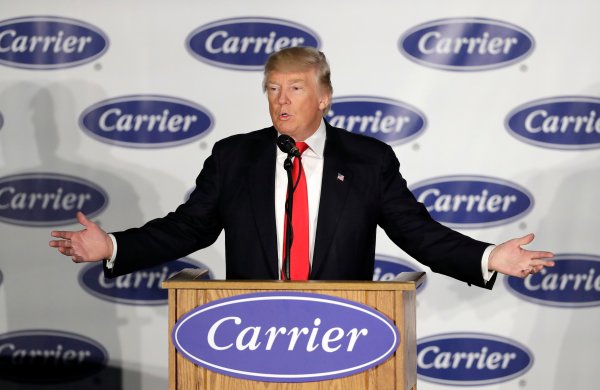 Trump Warns of 'Consequences' for Job Outsourcers
Next Up: Editor's Pick