A sentry walks his post with a view of Diamond Head, marking Pearl Harbor U.S. Naval Base, in 1941.
Iconic Archive / Getty Images
By Lily Rothman

With 75 years having passed since the Dec. 7, 1941, attack on Pearl Harbor—the surprise air raid by Japan that precipitated the U.S. entry into World War II—most of the aspects of that day have been thoroughly explored: the military strategy, the political maneuvering, the personal tragedies, the moments of heroism. And yet mysteries do remain.

And one of them, in particular, is downright spooky. Here’s how Craig Nelson describes it in his new book Pearl Harbor: From Infamy to Greatness:

The advertisements can now be seen in the New Yorker‘s online archive, both the main copy and the “tag ads.”

Nelson, who served as historical adviser for the new LIFE VR virtual-reality experience Remembering Pearl Harbor, tells TIME that he first heard this story “a long, long time ago,” early in his years-long research process for the book. It was included in a list of Pearl Harbor facts that had been compiled in the 1950s, and the write-up made it clear that the FBI had “a bee in their bonnet,” as Nelson puts it, about the matter. But further research revealed that there was nothing more to ad.

His personal theory? That it’s definitely strange, but probably not a warning about Pearl Harbor. The numbers on the dice could represent many things other than the 12/7 date of the attack, and it would have had to be submitted to the publication oddly far in advance before the attack. (After the original publication of this story, a reader helpfully solved one part of the mystery, with evidence that the game itself did really exist—something that Joseph Bell’s passenger had, according to legend, been unable to confirm back in the ‘40s. “Snopes has apparently uncovered what the FBI couldn’t reveal to me,” says Nelson.) On the other hand, the U.S. wasn’t at war yet, so why would an advertisement talk about Americans spending time in an air-raid shelter?

So it’s no wonder that the ads provoked conspiracy theorists to wonder. 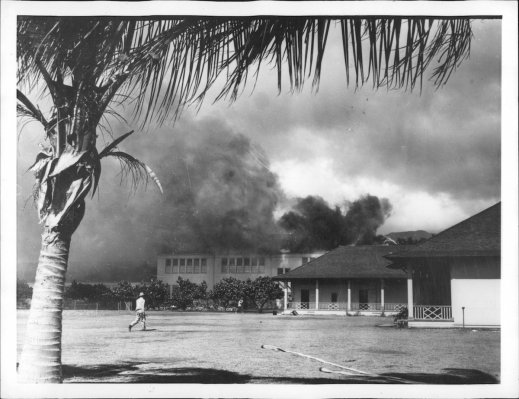 Powerful Stories of the Japanese-American Children Who Witnessed Pearl Harbor
Next Up: Editor's Pick