College educators included on a recently published “Professor Watchlist“—which accuses them of discriminating against conservative students—are criticizing the list as harmful to academic values.

The list, which was compiled by conservative group Turning Point USA and launched online on Nov. 21, includes professors who “discriminate against conservative students and advance leftist propaganda in the classroom,” according to the criteria on the site.

“I think a lot of professors are both upset about this, and some actually wear it as a badge of honor because it means I’m doing something right in helping my students to critically think about issues,” said University of Pennsylvania professor Anthea Butler, who was included on the list. “It’s obviously an attempt to silence people.”

Butler is listed on the site because of a tweet in which she used a racial slur in response to former Republican presidential candidate Ben Carson’s belief in the right to fly the Confederate flag. Butler, who is black, said the tweet, which has since been deleted, was a “blanket statement,” not intended as a reference to Carson. She also said her analysis of the book, Is God a White Racist?, was taken out of context by Turning Point USA.

“I think there are more students in college who believe in a center-right conservative ideology who have been silenced, ostracized or marginalized,” Kirk said, “and we hope we can be part of a movement to at least make the campus more comfortable for people who believe in liberty and conservative values.”

Kirk said the group had been preparing the list for months and its publication soon after the presidential election was coincidental. But some professors said the current political climate amplified its impact.

“One of the things my university said on this round is that this is concerning because of the climate that we’re in now. In any other climate, it might be OK to just let it go,” said Enrique Neblett Jr., a professor at the University of North Carolina at Chapel Hill. “But I live in North Carolina, where there are Klansmen celebrating Trump’s victory.” Neblett also took issue with the accuracy of his listing, saying he was misquoted during a speech at another university.

“My biggest fear is that people will see my name on this list and target me or my family as a result,” he added.

Kirk said the group condemns any threats made against professors on the list. “We’re not trying to intimidate. We’re not trying to make these professors feel any less secure,” he said. “The inspiration was just to shine a light on what we feel has been an unfair balance toward left-leaning ideas and biases in our universities”

But not all incidents that earned professors a spot on the list took place in lecture halls, nor represented discrimination.

John Traphagan, a professor at the University of Texas at Austin, was placed on the list because of a Dallas Morning News column in which he advocated for gun control measures. Kirk said the column was relevant to students with conservative beliefs who might now opt out of taking Traphagan’s class.

“I don’t know what that has to do with anything I do in the classroom. I don’t know how that’s related to discrimination against conservatives,” Traphagan said. “If you’re trying to harm other people, then that’s a different story, but if it’s just a political opinion, a policy position, that’s not discrimination, that’s voicing an opinion.”

Traphagan said similar lists have been published before, and he thinks the group had a right to create one, but he doesn’t think it accomplishes anything.

“It’s very poorly conceived,” he said. “It accomplishes very little, if anything, and the one thing it can do is intimidate people who might voice their opinions” 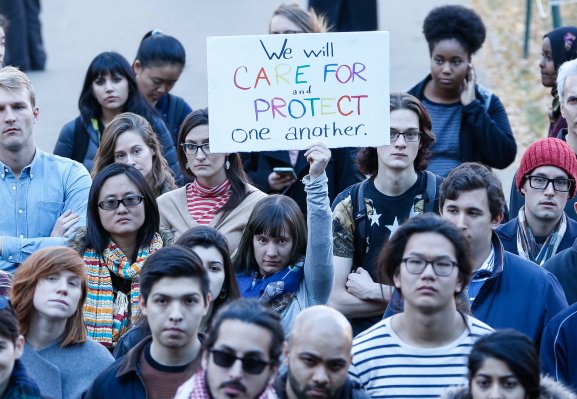