Senator Bernie Sanders speaks to supporters at a meet and greet promoting his new book, Our Revolution, at Books-A-Million in South Portland, ME., on Nov. 21, 2016.
Brianna Soukup—Portland Press Herald/Getty Images
By Lucinda Shen

As Donald Trump celebrated his deal with Carrier to keep 1,000 jobs in the country Thursday, Sen. Bernie Sanders (D-Vermont) is warning that the deal should be cause for concern.

That’s because the President-elect managed to pull the deal off by offering the air-conditioner manufacturer by offering tax breaks to Carrier’s parent company—United Technologies—worth an estimated $700,000 annually for several years, a source close to the firm told Fortune. The company initially planned to send some 2,000 Indianapolis-based jobs to Mexico,

In an op-ed on the Washington Post, Sanders argues that in doing so, Trump had essentially awarded a company that was threatening to move abroad—a maneuver that may now be used by other U.S. corporations hoping to lower their costs.

“He has signaled to every corporation in America that they can threaten to offshore jobs in exchange for business-friendly tax benefits and incentives,” Sanders wrote, noting that Trump has once threatened to make Carrier “pay a damn tax.” “Even corporations that weren’t thinking of offshoring jobs will most probably be reevaluating their stance this morning.”

The U.S. has a high corporate tax rate around 35%, which has triggered several corporate inversions deals in recent years, such as the now broken mega-merger between U.S.-based Pfizer and Irish drugmaker, Allergan. Trump has promised on the campaign trail to also lower corporate taxes to 15% in a bid to fuel investments and keep companies in the states.

“In essence, United Technologies took Trump hostage and won,” the onetime presidential candidate wrote. “And that should send a shock wave of fear through all workers across the country.“ 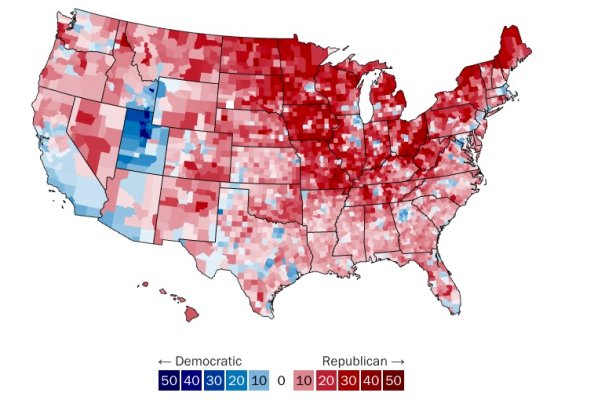 See a Map That Shows Exactly Why Trump Won
Next Up: Editor's Pick