Clown Who Cheered up Children in Aleppo Killed in Missile Strike

This undated photo courtesy of Ahmad al-Khatib, a media activist in Aleppo, shows Syrian social worker Anas al-Basha, 24, dressed as a clown, while posing for a photograph in Aleppo, Syria.
Uncredited—AP
By Julia Zorthian

A man who dressed up as a clown to cheer children trapped in war-devastated east Aleppo was reportedly killed in a missile strike on Tuesday.

Anas al-Basha, 24, worked at Space for Hope, a center that helps hundreds of Syrian children in the rebel-held region of Aleppo, Syria. On Tuesday, an air strike presumed to be from Russian or government forces killed al-Basha, the Associated Press reports.

“He would act out skits for the children to break the walls between them,” Samar Hijazi, who was al-Basha’s supervisor at Space for Hope, told the AP. “All of us in this field [of childcare] are exhausted, and we have to find strength to provide psychological support and continue with our work.”

His death occurs as the 250,000 civilians trapped in Aleppo live in danger of airstrikes and lack access to food, hospital care or other necessities. Space for Hope provides counseling and other help for some of the 100,000 children caught in the war zone.

“Anas…refused to leave Aleppo and decided to stay there to continue his work as a volunteer to help the civilians and give gifts for the children in the streets to bring hope for them,” wrote Mahmoud al-Basha, who said he was Anas’ brother, the BBC reports. 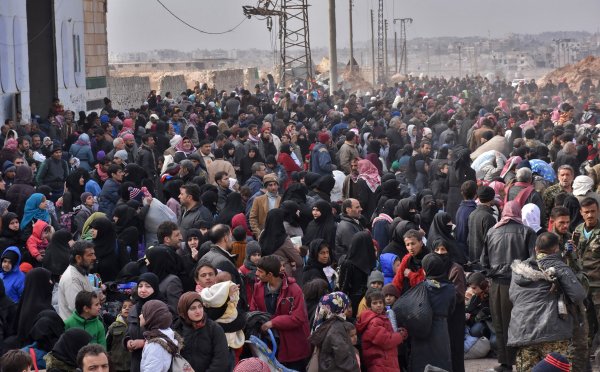 Thousands Flee Aleppo As Assad's Force Step Up Campaign
Next Up: Editor's Pick