It's a Mean, Sometimes Sad World-but Reading Can Help

As much as we may want to shield children from all the terrible, horrible, no good, very bad things in life, too often we don’t get a choice. Some parents may be facing that fact in the aftermath of the U.S. election, with increased reports of bullying at schools and children expressing anxiety and fear. Of course, there are many other problems life hurls at us, including family drama, personal trauma, grief. And kids have neither the benefit of experience nor the maturity of intellect to process all these difficulties.

Five new kids’ books serve as guideposts for a variety of difficulties and as important reminders that we have a choice in how we react to such trials. These stories–from the fantastical account of a tuberculosis patient during World War II and the straightforward questions of a child whose grandmother has Alzheimer’s disease to the heart-wrenching tale of a teen who blames himself for his friends’ deaths–introduce young readers to relatable characters who are processing and recovering from hardships and sorrows. Each book, in its own way, offers a guide for young readers who are facing their own struggles. Together, they reveal a lesson for us all in resilience and hope.

1. WHY CAN’T GRANDMA REMEMBER MY NAME?

Driven by questions from a child whose grandmother has Alzheimer’s–“Will Grandma get worse? How can I have fun with Grandma?”–this picture book is interspersed with drawings done by children and by Alzheimer’s patients, and offers an outline for families dealing with the illness.

Carver Briggs blames himself for the deaths of his three best friends (he sent the text message that likely caused the car accident that resulted in their deaths). What’s more, he could face a criminal investigation into his role. The novel follows his journey as he makes unlikely allies in his attempt to make peace with his loss and guilt.

3. THE SECRET HORSES OF BRIAR HILL

Twelve-year-old Emmaline has a secret: she can see winged horses in the mirrors at Briar Hill hospital, a British facility for children with tuberculosis during World War II. The magical adventures of the horses come to life as Emmaline recovers from her illness and must face the sickness of those she loves.

Now in middle school, Estefania “Stef” Soto has become embarrassed by her Mexican-American family’s food truck and is tired of being teased at school as the “taco queen.” But when the family business is threatened, she becomes one of its biggest defenders and, in the process, learns to embrace her identity.

Gertie Foy has one plan on her first day of school: to be the greatest fifth-grader ever. In doing so, she hopes to get the attention of her estranged mother, who is planning to remarry and move away. As Gertie faces off against a rival student and deals with the daily trials of school life, she must also come to grips with her mother’s abandonment. 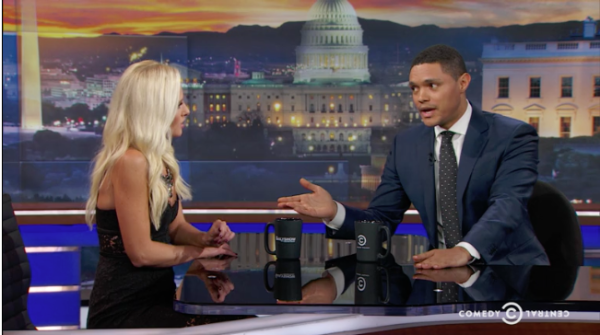 Trevor Noah Faces Off With Tomi Lahren: 'I'm Comparing Donald Trump to Hillary Clinton, Not the Pope'
Next Up: Editor's Pick