Style Over Substance: Why Fidel Castro's Revolutionary Chic Was a Fraud

I met Fidel Castro 40 years ago, and he was really, really cool. I was part of an American delegation to Cuba led by Senator George McGovern; we met Castro at his brother Raúl’s farm. He showed up in an open Jeep, in a cloud of dust, wearing his famous combat fatigues. He took us to a nearby town, which he worked like a Boston ward heeler, smiling and shaking hands. People called him by his first name. “Hey, Fidel,” a woman said. “Last time you were here, you promised us a bus. What happened?” Castro told an aide to make a note of that and bought the woman an ice cream cone.

This was the Fidel whom the American left shamelessly romanticized. The style was fabulous and the substance … well, best not to linger on that. It was Fidel and Che Guevara–before the Beatles–who reinvented long hair and beards; it was Fidel and Che who invented dress-down chic. (There was a point, back in the 1950s, when only farmers and mechanics wore dungarees.) As the 1960s progressed, the sartorial style of protest moved from basic middle class–check out the crowd at Martin Luther King Jr.’s 1963 Lincoln Memorial speech–to guerrilla. It was a generational thing. Fidel was saying, “Screw you” to the shirt-and-tie crowd, also known as our parents. When he came to New York for a U.N. meeting, he stayed at a hotel in Harlem. How cool was that?

The emphasis on style over substance has been a distinguishing feature of the left for the past 50 years. Yes, of course, there was plenty of substance, but it mostly related to social issues. Abortion rights has been without question the most powerful and passionate issue when it comes to driving votes for Democrats. There has been a greater audience for civil liberties on the left than kitchen-table issues–and these have been fetishized over time. Gay rights became transgender bathrooms, the quest for racial equality became the easy, racialist out of affirmative action; the “right” of the cast of Hamilton to speak their version of truth to Mike Pence sits uneasily with left-wing support for stifling political correctness on campus. If you listen to “progressives” talk about poverty, small business, public education and improving government services like the VA or the post office, they have nothing of interest to say. They have postures, not positions. They reflexively support colorful “activists” who feed on anger and often don’t represent the constituencies they claim–those activists inevitably act and look more like Fidel than Nelson Mandela on cable TV. Castro was the avatar of the flash left, the showbiz left–think of Sean Penn in Iraq–of gestures rather than results, of ice cream cones rather than buses.

And now the left’s romance with stylized Oedipal anger has been adopted across the American spectrum, especially by the media. There has never been a presidential candidate more caught up with style over substance than Donald Trump. His diversionary tweets about voting fraud and flag burning are all about populist class warfare. His search for a Secretary of State has become a reality-TV show: The Policy Bachelor. So I was heartened and rather astonished when Trump issued an utterly lucid statement on the death of Fidel Castro: “Today, the world marks the passing of a brutal dictator who oppressed his own people for nearly six decades. Fidel Castro’s legacy is one of firing squads, theft, unimaginable suffering, poverty and the denial of fundamental human rights.” More of that, please.

Back in 1975, I strayed from the official tour and went to a Catholic church in Havana looking for dissidents. I found a man who had been imprisoned and tortured by both the right-wing dictator Fulgencio Batista and the Castro regime. I asked him what he thought American policy toward Cuba should be. “End the embargo!” he said. “Recognize us!” The Castros needed the American Satan and its embargo as an excuse for their socialism-induced poverty and martial law. They would never be able to withstand the tide of freedom–and commerce–that would wash over the island. Motown and bell-bottoms and color televisions were incredibly powerful weapons against totalitarianism. (Castro’s first words when he met our group was, “Where’s Barbara?” He was looking for Barbara Walters of the Today show, his favorite program.)

I think the 1960s ended for me that day in Havana. Revolutionary style was a fraud. The left’s mantra of “social justice” really meant “equality of poverty,” as a young Muscovite whispered to me in 1989. There has to be a balance between freedom and equality, but freedom is always more important. 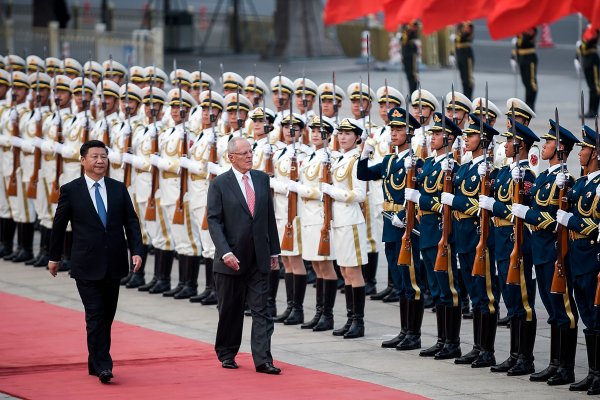 Peru Is a Bright Spot on the Global Stage
Next Up: Editor's Pick