What has surprised you about the response to your newest book, Becoming Wise: An Inquiry Into the Mystery and Art of Living?

Even in early 2016, people were so weary–sore inside. In the 24/7 news environment, people are bombarded with the same story of what is catastrophic and corrupt and failing 25 times before lunch. They start to internalize that not as news but as the norm. An effect I see on people in conversations that came up around the book is, there are actually so many beautiful, generative things happening in the world.

How did America get to this place of such division?

We live in this moment of these dazzling technologies, this globalization that however imperfect and complicated has connected humanity in a way that would have been unfathomable not long ago. But it has outstripped our ability to make it work for human community and well-being. It is a moment of reckoning.

I’m interested in drawing people out at the intersection of what they know and what they do and who they are, and I am interested in their questions as much as their answers. Politicians can’t speak for themselves, they are representative–they cannot be truly revelatory. They are punished if they acknowledge the questions they have. If we want different politics, we really have to think about what we reward.

Are there limits to listening?

Listening is not just about being quiet while the other person talks, it is about being present and willing to be surprised and curious. That is muscle memory we have to build up.

What are the yearnings of millennials?

Millennials are famous for not being religious. I liken them to the early monastics. It was this spiritual-renewal movement on the edges of established religion, wary of it. I have a suspicion that 100 years in the future, people might look back on this, what we are seeing as a repudiation of religion, being the sources of its renewal.

Americans are becoming spiritual and not religious. What is the difference?

Spirituality is the essence, the truths, the insights, the revelation, the practices. Religion is a container that is fashioned from human beings and can take on all our flaws and failures, and can be dropped and broken. There is this symbiotic relationship. When people go deeper in a spiritual investigation, they often make some kind of connection with the tradition.

I mostly read novels. When I [took a month-long social-media hiatus], I read some Thomas Merton and John O’Donohue. I always have Pema Chödrön with me, I always have When Things Fall Apart, because things are always falling apart. That would be a thing for everyone in this country to remember–that actually the ground was never all that stable under our feet. Understanding is the nature of waking up.

What are you mulling to explore next?

This matter of what a conversation is, as opposed to a debate or a confrontation. We don’t even know right now how to get the people we disagree with in the room with us, unless you set up a formal debate, and it is my ideas against your ideas. Public life is so unsettled, it creates this opening in which we can start to weave whatever common life is going to look like in the 21st century. Can we figure out what questions we have in common if we don’t have answers, and let those be the tools with which we think about how we create the world we want our children to inhabit? 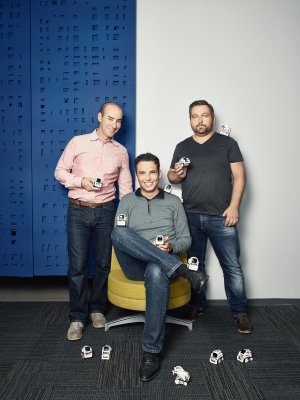 Artificial Intelligence Invades the Home ... In Toys
Next Up: Editor's Pick