Sherri Papini, the California mom who mysteriously vanished in early November before being found allegedly beaten but alive along a rural road on Thanksgiving Day, is offering new details about the two Hispanic women who allegedly abducted her.

During a series of interviews this week with investigators, Papini told them that one of the women had long curly hair, thin eyebrows and pierced ears. The other woman, who was older, had straight black hair with gray and thick eyebrows. Both of the women allegedly spoke in Spanish the majority of the time.

“There is a lot still unknown about her assailants,” said Shasta County Sheriff Tom Bosenko at a Wednesday afternoon press conference. Bosenko said Papini’s alleged abductors had sometimes covered her face and had concealed their faces as well during her three-week ordeal.

“Sherri did her best in providing the descriptions but was not able to provide a detailed description because of the assailants covering their faces,” Bosenko said.

Papini, he said, was “cooperative and courageous” during the “intense” interviews with investigators. Police also showed Papini video surveillance footage of SUVs seen in the area around the time of her abduction, but “none of the vehicles were a match,” said Bosenko.

Papini was allegedly kidnapped while out for a jog on Nov. 2. She was found around 4:30 a.m. Thanksgiving Day in Yolo County — about 150 miles south of her Redding home, where she was last seen.

Papini’s husband, Keith, described the horrific condition she was in the first time he saw her after her release by her captors.

“My first sight was my wife in a hospital bed. Her face covered in bruises ranging from yellow to black because of her repeated beatings. The bridge of her nose broken,” Keith Papini wrote in a statement obtained by PEOPLE. “She has been branded and I could feel the rise of her scabs under my fingers.”

He added that Papini weighed only 87 lbs. and her long, blonde hair had been chopped off. He wrote that Sherri had been thrown from a vehicle with a chain around her waist – which was also attached to her wrists – and a bag over her head.

On Wednesday, Bosenko confirmed that Papini was branded but would not provide any details about what the brand looked like or where it was placed on her body.

Bosenko told PEOPLE that the motive behind the alleged kidnapping is still unclear. 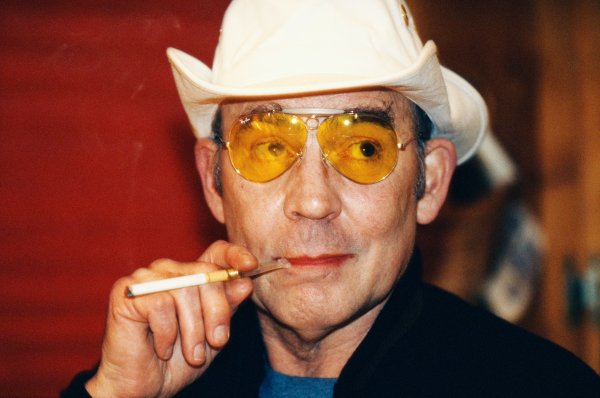 Hunter S. Thompson's Widow Plans to Clone and Sell His Marijuana
Next Up: Editor's Pick