Jennifer Aniston Told Ellen She Was 'Fed Up' With 'BS Tabloids'

Actress Jennifer Aniston just shared what prompted her to write her viral Huffington Post essay on the absurd and misogynistic approach tabloids take when writing about women.

Speaking on The Ellen DeGeneres Show on Wednesday, Aniston said she initially wrote the op-ed for more therapeutic reasons, when in the immediate aftermath of her mother’s death she found herself mobbed by paparazzi due to a so-called ‘unflattering’ bikini shot that, unbeknownst to her, had been making the Internet rounds as fodder for body-shaming.

“Another wonderful photograph, which I’ve had to sort of live with for the last 10, 15 years,” Aniston said. “Picture of me with a bump and circle around my stomach with an arrow pointing to it, just this sort of disgustingly objectifying kind of way. And I was just fed up with it.”

She ended up publishing it because she felt so strongly that the tabloid industry, plus society in general, needed to take more responsibility for the narratives it ascribed to women – reducing them to bodies, or love lives, or potential motherhood, or purported petty fights.

“We as women do a lot of incredible things in this world other than just procreating,” Aniston continued as the studio audience broke into applause. “And not that that is not … but we just get boxed in. They love the narrative, they love the story, the love the ‘she’s jealous of this person,’ and ‘this person’s depressed,’ and ‘oh my gosh, never going to have a child.’ Whatever the horrible little headline is, we’ve just got to break out of that and go ‘whoa, whoa.’ And women, I have to say, are many of the authors of these horrible articles that are written in these BS tabloids. So, we have to stop listening to them and we have to stop buying them because we have to support each other, especially at this time, to love each other, to support, and to be proud of women, of whatever your choice is in life. It’s up to us what makes us happy and fulfilled.”

No word on whether “especially at this time” was a Trump-specific dig, though that certainly does seem plausible. 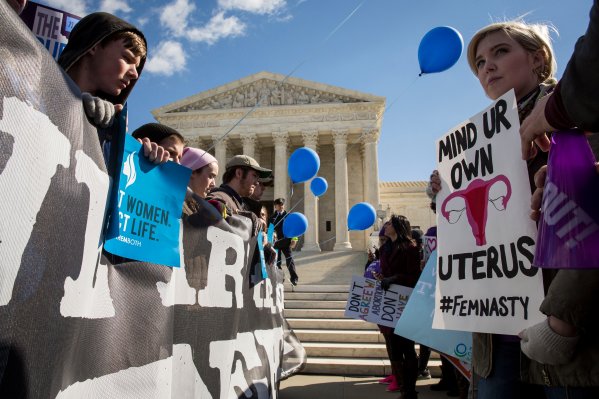 Planned Parenthood Files Wave of Lawsuits to Strike Down Abortion Restrictions
Next Up: Editor's Pick