The father of Sherri Papini, the California mom who mysteriously vanished for three weeks before being found along a rural road on Thanksgiving Day, spoke out about the case to PEOPLE via text message.

“My wife and I are so thankful to have Sherri back,” Richard Graeff writes. “We have talked to Sherri a few times. Didn’t get into details on the case, just wanted to hear her voice. We don’t know anything more than you do. She needs time to heal. Thank you.”

Papini was allegedly kidnapped while out for a jog on Nov. 2. She was found around 4:30 a.m. last Thursday in Yolo County — about 150 miles south of her Redding home, where she was last seen.

Papini’s husband, Keith, has described the brutal condition she was in the first time he saw her after her release by her captors.

“My first sight was my wife in a hospital bed. Her face covered in bruises ranging from yellow to black because of her repeated beatings. The bridge of her nose broken,” Keith Papini wrote in a statement obtained by PEOPLE. “She has been branded and I could feel the rise of her scabs under my fingers.”

He added that Papini weighed only 87 lbs. and her long, blonde hair had been chopped off. He wrote that Sherri had been thrown from a vehicle with a chain around her waist – which was also attached to her wrists – and a bag over her head.

Shasta County Sheriff Tom Bosenko has said that Papini told police her captors were two adult Hispanic women, armed with a handgun and driving a dark colored SUV, and that authorities “currently have no reason to disbelieve Sherri Papini’s story.”

Bosenko tells PEOPLE Papini said only one of the women released her.

Bosenko says that before Papini was found, “She was able to walk to a nearby church but nobody was there at 4:30 in the morning, and then she walked back and was able to flag down a motorist near Interstate 5 and Yolo County Road 17.”

Alison Sutton tells PEOPLE she was driving and called 911 after seeing a woman “looking frightened and panicked” on the side of the highway “waving a piece of fabric that looked like a shirt, waving it up and down trying to flag someone.”

With reporting by CHRISTINE PELISEK 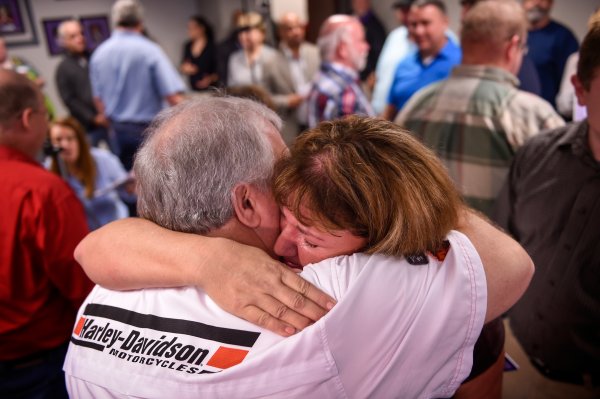