Jakarta Governor Basuki Tjahaja Purnama, nicknamed "Ahok," leaves the stage after meeting with supporters while campaigning for an upcoming election in Jakarta on Nov. 16, 2016
Darren Whiteside—Reuters
By Yenni Kwok

The police submitted a dossier to the AGO last Friday, nine days after they named the Christian governor, popularly known by his Chinese nickname Ahok, as a suspect in the case.

Ahok, who is running in the gubernatorial election next year, said the legal process would take some time. “The proceedings until the ruling could take one to two years,” he said. “There’s nothing that shows I insulted a religion. Nothing at all.”

The governor, who has a reputation for speaking bluntly, is accused of insulting Islam in a campaign speech he made on Sept. 27, in which he pushed back against hard-line and ultraconservative Muslims who have argued that a non-Muslim should not hold a leadership position in Indonesia — the world’s most populous Muslim nation.

At the time, he said that hardliners who had backed up their position by citing a Quranic verse were lying. He told a crowd: “Ladies and gentlemen, you don’t have to vote for me — because you’ve been lied to by those using [the Quran’s] Surah al-Maidah verse 51.”

Many religious moderates have defended Ahok, and his supporters say the transcript of his speech has been edited to change its meaning. An academic who uploaded the video and transcript online has also been charged with hate speech.

Ahok has repeatedly apologized, but so far failed to appease conservative anger.

Muslim hard-liners have already staged two mass protests against Ahok. One person died in the evening riots that followed a rally on Nov. 4. Around 200,000 people took the streets in downtown Jakarta that day, demanding the governor to be persecuted and that President Joko “Jokowi” Widodo to step down.

The hard-liners vow to go ahead with more protests on Friday. Indonesian police chief Tito Karnavian gave a warning on Nov. 21 about the planned rallies, saying that “there are political agendas, one of which is a coup attempt.”

After his boss Jokowi was elected President in 2014, Ahok became Jakarta’s governor — a political milestone for a member of Indonesia’s ethnic Chinese minority. He has won praises for no-nonsense approach to problems that plague the sprawling capital, though his uncompromising attitude has also made enemies.

Ahok is still allowed to seek re-election despite his legal difficulties, but his electability has slipped to No. 2, a survey showed last week. His rival Agus Harimurti Yudhoyono, the eldest son of former President Susilo Bambang Yudhoyono, led the poll. 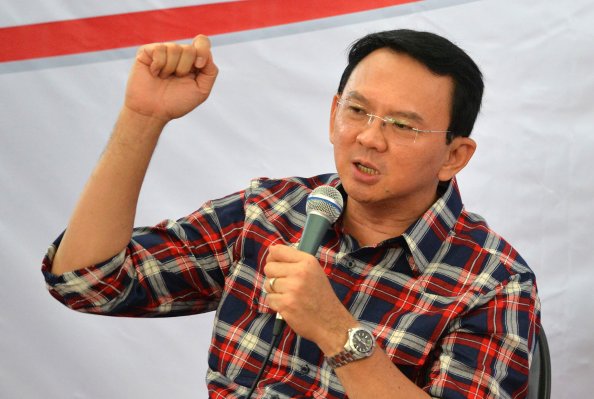 Jakarta's Governor Was Questioned for Hours by Police as Part of a Blasphemy Probe
Next Up: Editor's Pick