Cuba Is a Litmus Test for Trump

Fidel Castro observes the May Day parade at the Revolution Square in Havana, Cuba May 1, 1998.
Sven Creutzmann/Mambo Photo—Getty Images
Ideas
By James Stavridis
Admiral Stavridis (Ret.), a TIME Contributing Editor, was the 16th Supreme Allied Commander at NATO and is an Operating Executive at The Carlyle Group. His new book is 2034: A Novel of the Next World War. His previous nonfiction book was Sailing True North: Ten Admirals and the Voyage of Character

As the Trump administration begins to frame up its policy approach for the coming four years, an initial litmus test may be lurking just 90 miles south of our border in Cuba. The death of Fidel Castro was initially greeted with a simple and somewhat ambiguous tweet from the President-elect: “Fidel Castro is dead!” But that acknowledgment was then followed by a lengthier and appropriately harsh condemnation of Castro’s life and times. As usual, it is hard to discern which way the new team will break in regards to Cuba.

One thing is clear: despite the passing of the supreme leader to join other 20th-century Communist leaders in the historical pantheon of failure, the situation in Cuba will provide a relatively blank slate upon which the Trump administration can paint. Will they follow their campaign rhetoric, designed largely to appease aging Cuban-American voters in south Florida, and sharply cut back on the executive actions the Obama administration used to open the doors? Or will they seek a more sensible, transactional approach that provides openings for U.S. businesses and perhaps over time achieves the desired effect of shifting the landscape to a more democratic and just society? Which course they choose may well signal the approach they will use for Russia, China, Ukraine, Syria and other hotspots around the globe.

While analysis varies concerning the true impact of Castro’s death, his passage will certainly remove any lingering constraints that his younger brother and the current dictator, Raul Castro, feels about undoing doctrinaire aspects of La Revolucion. Anyone with an elder sibling, especially one whose global reputation—deserved or not—is so massive, can appreciate the psychological leverage that dominant siblings can exert, even in their dotage. Raul may very well choose this moment to begin further loosening of commercial opportunities, mild free-market experiments and limited additional access to the internet. If so, the Trump administration may take a more pragmatic, give-and-take relationship that permits some of the Obama reforms to remain in return for such improvements—and work to gain concessions in human rights as well.

Another interesting aspect of Castro’s death, however, will be felt throughout the broader region. The leftist acolyte states—Venezuela, Nicaragua, Bolivia and Ecuador—will feel the loss of their role model keenly. Castro’s shadow was a huge one, and with him finally gone once and for all, the room to maneuver may open for a Trump administration with regime’s in oil-rich but highly destabilized Venezuela, for example. It will allow the administration to use the Organization of American States with more freedom and create more diverse alignments among Latin American nations.

A difficulty for the Trump team will be the division in the south Florida Cuban-American community, which falls roughly along generational lines. Younger Cuban-Americans and those with business possibilities tend to favor further openings. Older Cubans, and many U.S. political actors, would prefer a revision to the hardline stance, a continuation of the embargo and efforts to actively undermine the Raul Castro regime. For the Trump team, the business aspects will be important—the possibilities for profitable investment and trade in agriculture, tourism, bio and hydrocarbon exploration are all potentially significant. Watching a Trump decision calculus will be a “canary in the coal shaft” in terms of knock-on action.

A pragmatic, transactional approach would suggest a similar approach with Russia, overlooking its aggression in Ukraine and cyber in order to find a modus vivendi. It might presage cutting a deal with China that protects that huge market for American business while demonstrating far less concern over Chinese maneuvers in the South China Sea. It might even mean that a Trump administration that would think twice about signature issues like “a big, beautiful wall,” paid for by the Mexicans on our southern border, opting instead for diplomacy and partnership. Conversely, simply following the campaign rhetoric would give weight to those worried about a President Trump actually executing many of his controversial foreign policy initiatives.

Watching the Cuban litmus test will be very instructive. Let’s hope for a pragmatic approach that continues the momentum of engagement—which offers the best hope of eventually achieving a more democratic Cuba. 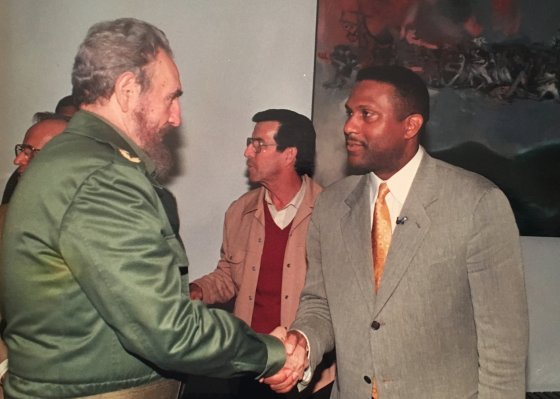 The Time I Stood Up to Fidel Castro
Next Up: Editor's Pick