Syrian families, fleeing from various eastern districts of Aleppo, queue to get onto governmental buses in the government-held eastern neighborhood of Jabal Badro, before heading to government-controlled western Aleppo, on Nov. 29, 2016
George Ourfalian—AFP/Getty Images
By Jared Malsin/Istanbul

An assault by Syrian government forces and allied militias in the city of Aleppo has forced up to 16,000 people to flee over the last few days, as a besieged rebel stronghold began to collapse after more than four years of fighting.

The fall of key neighborhoods of the city on Monday was one of the clearest illustrations to date of the rapid unraveling of the armed rebellion that spilled out of a popular uprising against the regime of Syrian President Bashar Assad in 2011. The advances in recent days by forces loyal to Assad could signal an endgame in the battle for Aleppo, once Syria’s most populous settlement, where rebel fighters have held on to a section of the city since 2012.

If Assad manages to assert control over Aleppo, he will complete his domination over the majority of Syria’s major population centers. As many as 300,000 people were trapped in the eastern, rebel-held section of Aleppo prior to the current government offensive, and as many as 16,000 people fled “over the past few days,” according to a statement from the United Nations’ humanitarian chief, Stephen O’Brien, on Tuesday.

Images circulated on Tuesday showed fleeing civilians walking through the bombed-out streets of the city, carrying children and bundles of belongings. Residents of East Aleppo described thousands of people fleeing the fighting, pouring into what remains of the opposition enclave, following the fall of neighborhoods including Hanano and Sakhour. Some 4,000 others reportedly fled to the government-held western side of the divided city.

“It’s raining now—barrel bombs and artillery shelling,” says Wissam Zarqa, a teacher living in the eastern, rebel-controlled section of the city. He described attacks near his school in a message sent to journalists on Tuesday afternoon. “When I went there, we were targeted—a lot of shelling around us. We couldn’t allow students to go out immediately. They made them go out three after three like this so that it wouldn’t be dangerous.”

Aleppo has been the epicenter of Syria’s civil war since rebels seized roughly half of the city in 2012. The country descended into turmoil after Assad violently resisted a popular uprising that began in early 2011, inspired by protests that toppled authoritarian leaders elsewhere in the Arab world. But though he has been under pressure, Assad has never fallen, and as many as a half million people have died in the conflict over more than five and a half years.

In recent years, Assad and his allies have employed an approach that opposition activists call “kneel or starve”: encircle a rebel-controlled town or city, then impose a siege, before ultimately negotiating the exit of both fighters and civilians. Residents of eastern Aleppo, weary after four years of nearly nonstop fighting and a months-long blockade, fear that a similar fate could await them—or something worse. Many are wary of accepting evacuation at the hands of the government, worrying that they could be detained and punished as suspected supporters of the opposition.

The Assad regime, backed by Russian airpower and mainly Shiite militia forces from countries like Iran, has been closing in on east Aleppo since February 2016. Regime and Russian forces renewed their offensive on Nov. 15, citing rebel attacks on government-held Western Aleppo. Shelling knocked out of commission the last fully functional hospital in the rebel section of the city on Nov. 18.

The campaign by the regime and Russia has resulted in attacks on dozens of hospitals, schools, marketplaces and other vital centers of civilian life in East Aleppo and other rebel-held areas of Syria. International condemnation that has followed has done little to stop the attacks.

The election of Donald Trump—who has questioned President Obama’s support of some Syrian rebel groups and his condemnation of Assad and Russia’s involvement in the war—may have accelerated Assad’s offensive in Syria. A pro-government official told Reuters that Assad and his Russian allies are trying to drive the rebels from the city before Trump takes office on Jan. 20.

“Nobody seems capable of or willing to apply effective pressure on the regime or its allies to give some relief to besieged east Aleppo, and so you end up in a situation where east Aleppo’s rebels are penned in, without supplies, without reinforcements,” says Sam Heller, a Beirut-based Syria analyst with the Century Foundation. “If the regime wanted to it seems like it could just sit back and wait for them to get hungrier. Instead, it’s pressing its advantage.”

Rather than sweep into the eastern section of the city all at once, Heller said the pro-Assad side could intersperse attacks with negotiations and calls for civilians to leave. “It can just turn these offensives on and off,” he said. 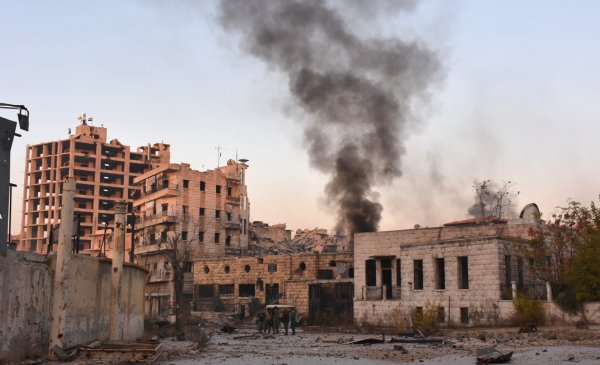