Tim Ryan Is the Perfect Politician for the Age of Anxiety

Tim Ryan is not going to be House Democratic Leader in January.

Still, in running a civil, high-profile campaign for the position, the 43-year old six-term Congressman established himself as a potential pick when Nancy Pelosi, the 77-year-old incumbent, eventually steps aside. As a down-to-earth populist Democrat who won 68% of the vote in a Rust Belt Trump stronghold, Ryan presents some obvious assets for the Democratic Party. But the meaning of Ryan’s rise isn’t really about identity politics or electoral positioning. It’s something much less obvious.

As a practitioner-advocate of mindfulness meditation, Ryan has been on a disciplined, systematic, multi-year quest to get Washington to calm down. He might be the perfect politician for America’s age of anxiety.

The Ohio congressman has not only written a book on meditation and public policy, he’s also brought leading contemplative teachers to Capitol Hill, taught meditation around D.C. and founded the so-called “quiet time caucus” to get members and staff to relax and recalibrate in one of the nation’s most hectic workplaces. While this unlikely role has led some to call Ryan “Congressman Moonbeam,” it’s hard to reconcile the label with his actual personality—a plainspoken former high school football star who regularly connects with his constituents over beer and TV sports at the Open Hearth bar on Steel Street in Youngstown, Ohio.

Ryan’s meditation practice isn’t a curiosity or a quirk. Rather, it’s a core leadership advantage.

At a time of turbulence—from climate and war to political strife and economic uncertainty—the party needs to offer not only sound policies but also leaders who can listen and stay equilibrated in the face of shocks and surprises. The reason meditation has gone from esoteric art to essential leadership practice at places like Google, Apple and the Pentagon is that it’s a proven tool for cultivating focus and resilience amidst stress and uncertainty. Business gurus like Bill George and Daniel Goleman have long touted mindfulness—the simple process of stepping back to focus on the breath and notice thoughts and sensations that arise—as a means to help leaders to listen better and to act on the basis of true intention as opposed to habitual patterns and emotional whims.

Growing medical research supports these claims. According to a recent Yale study, mindfulness meditation significantly reduces activity in the brain’s Default Mode Network (DMN), enabling a person to listen, focus and potentially even feel more compassion. A 2011 study led by Harvard Medical School’s Sara Lazar found that mindfulness meditation can actually alter the structure of the brain, increasing cortical thickness in the hippocampus and thereby improving learning, memory, and emotional regulation. The researchers also found that meditation decreases cell volume in the amygdala, the part of the brain that’s responsible for fear, anxiety, and stress.

While Donald Trump’s reality show demeanor was refreshing to many during the campaign, it’s hard to imagine his erratic behavior, emotional fickleness, and lack of focus playing well in moments that demand actual leadership.

In times of crisis, most citizens won’t want a president with such a hyperactive amygdala.

As we enter the age of Trump, we need leaders who—like President Obama—can stay calm and collected in the face of chaos and confusion. Of course, mindfulness meditation isn’t the only way to achieve equanimity in political life. But it makes sense to lift up public officials who have disciplined practices to cultivate focus and resilience. Tim Ryan seems like a good bet. 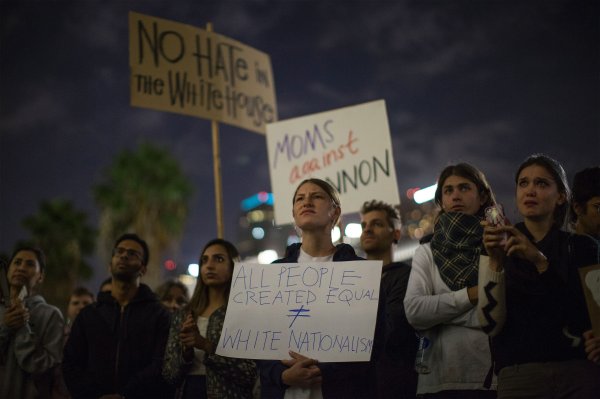 Stop Playing Defense on Hate Crimes
Next Up: Editor's Pick