This Ill-Fated Blind Date Escalated Into a Police Chase

Blind dates are always a gamble. But when one Alabama woman rolled her dice with her romantic fate on Saturday night, little did she know that the evening would end in a cop encounter and an eventful ride home—in a police car. The unnamed woman was set up with a man later identified as Jesse Allen Elliot, 22 years old, and was riding in his car when cops pulled Elliot over on an interstate for a traffic violation, local news station WRBC reports. He provided a name and birth date to the officer, who went to check the credentials (later determined to be false).

It was at that point, Alabama news site AL.com reports, that Elliot pushed his date out of the vehicle and led police on a car chase into Walker County, during which his driving was “erratic.” He was able to evade officers and reportedly remains at large.

Police, meanwhile, drove his date home. Luckily, she was unharmed in the incident.

“I think these two are off to a bad start,” Chief Deputy Randy Christian told AL.com, “and whoever fixed her up has some explaining to do.” This is apparently not Elliot’s first brush with the law; he has outstanding misdemeanor warrants, and his driver’s license was suspended at the time he was pulled over. 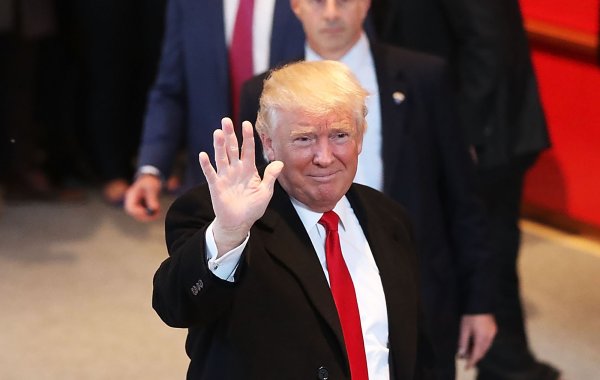 Donald Trump Debuts a Brand New Version of His Famous Red Hat
Next Up: Editor's Pick