This post contains spoilers for all four episodes of Gilmore Girls: A Year in the Life

Gilmore Girls creator Amy Sherman-Palladino served up a series of shocks to fans when Netflix released its revival on Friday. The first: Rory was having an affair with her college beau, Logan, played by Matt Czuchry. The second: Logan is likely the father of her unborn baby. TIME caught up with Czuchry, who appeared on The Good Wife as Cary Agos between the time Logan graduated from Yale and romanced Rory in London, to talk about why Rory and Logan are back together, how Logan’s changed and the father of Rory’s baby.

TIME: When did you find out the last four words—and their implication that Logan is probably father of Rory’s baby?

Matt Czuchry: I knew later on when we were filming. The four words were never put in any of the scripts that we read, so not everybody knew those four words. At some point in the process, Amy and Dan [Palladino] took me aside and told me.

In terms of what they mean specifically, I’ll leave that to Amy and Dan to say who the words relate to. And I’ll leave it to the fans to passionately discuss what it’s about.

Some fans were upset that Logan and Rory were back together but Logan has a fiancée. Do you find yourself having to defend the character to fans?

Fans are going to have their opinions about Logan or Jess or Dean or who Rory should be with. I don’t feel I need to defend Logan. But I do try to communicate through the work—even if fans don’t agree with him, at least they understand why he’s doing what he’s doing.

In the case of him being engaged, I feel like Odette represents his family obligations. I feel that Rory represents his true heart and soul and his love. Logan has always had his feet in both of those worlds— his family obligations and his love for Rory. I hope that it came through that Logan is deeply in love with Rory, always has been and always will be.

I will also say Rory’s in the same position. Obviously, Rory and Logan have a mutual agreement. It’s not one-sided. Whether that’s right or wrong, I’m not saying. Whether I’m defending Logan, I’m not saying. But my job is to try to get the audience to connect with Logan and understand why he’s making the choices he’s making.

Were you given any backstory about what happened between Logan and Rory between the end of the original series and the return to Netflix?

Amy sent me just the material for Logan through all four of the chapters. What I loved about “Fall” was that whole journey of the Life and Death Brigade and goodbye that Logan and Rory have. For me, that whole sequence is the best of Logan, the best of Rory and the best of Logan and Rory together—taking risks, having adventures. Logan knows that Rory is having a difficult time in her life and is trying to push her forward to the next moment. It was a great way to wrap up their story.

Is the sense of adventure what attracts them to each other?

That’s one piece of it. In terms of Logan, he’s always seeing Rory as someone that doesn’t need anything from him, and Logan wants to give her everything because of that. I think that for Rory, she’s been protected in a lot of ways throughout her life, and Logan is someone who pushes her to take those risks and those challenges and believes in her to follow her passions and live out her dreams.

How do you think the character of Logan has changed and grown since the original series?

Logan has always had a deep love for Rory even though he proposed to her and she said no, and they haven’t been together for a period of time. And when we saw him at the end of the series, he was constantly trying to fight against the family business. But now he’s embraced it, which is a more mature way to look at the opportunities his family can provide for him.

For most shows, that ending would be quite the cliffhanger. A Year in the Life is billed as a mini-series. Is there any truth to the rumors that there will be more Gilmore Girls?

Not anything that I’ve heard about. I don’t know if there’s going to be more Gilmore Girls. But I don’t see it as a cliffhanger. Everything is coming full circle in those four words. Lorelai’s going to become a grandmother. Rory’s going to become a mother. There are certain things that mirror Lorelai’s life. To me, that wraps up the show really nicely. How are Lorelai and Rory going to deal with this new person coming into the world? What kind of mother is Rory going to be? Those questions really call back to the beginning of the show.

In that full-circle logic, a lot of fans—myself included—have called Logan Rory’s Christopher. Do you think that’s true?

I think Amy and Dan see Logan as Christopher from a story perspective. For me as an actor, that’s not something actionable that I can play. I can’t play Christopher. I’ve always seen Logan as someone who pushes Rory to take risks and push her life in new directions. He’s helping her to achieve her dreams and providing her with the means to achieve those dreams—whether that be help from his father or the key to the house. He’ll do anything he can to help her. 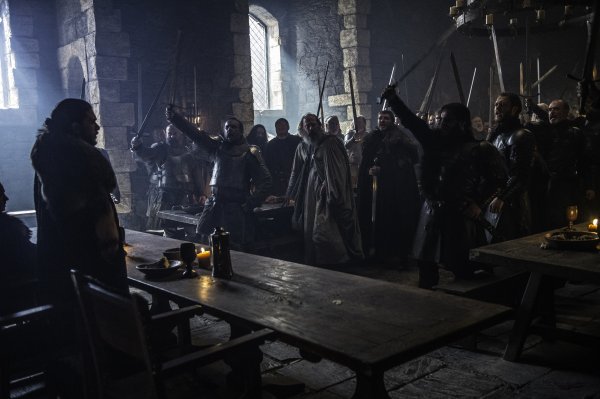 Game of Thrones' First Season 7 Teaser Shows the Starks Back in Action
Next Up: Editor's Pick