The Difference Between Racial Bias and White Supremacy

The list of white supremacists is getting longer all the time of late. John C. Calhoun. Theodore Bilbo. George Wallace. David Duke. Bernie Sanders. Mother Teresa. Others have argued that universities like Amherst are bastions of white supremacy, and expecting students to show up on time is white supremacist behavior. It seems that any white person who disagrees with a non-white one’s opinion about race issues is given the label.

Few will disagree that the first four belong on the list. But there will be reasonable disagreement over the final four. Among too many these days, the term “white supremacy” has become, of all things, a kind of hate speech.

Of course, the meaning of words and terms always changes and always has. “Audition” once referred to hearing and only gradually came to refer to hearing someone try out for a singing part on stage, upon which the term was extended to any kind of tryout at all. Like “white supremacy” has, terms have a way of coming to refer to less extreme manifestations of what they first referred to—”terrible” once meant truly horrific and now can be used about getting stuck in traffic.

But words can be more than words. The N-word, the F-word referring to gay men and the C-word referring to an anatomical part are slurs, tools for injury, not just dictionary terms. We also all understand that a word or term or reference can be a dogwhistle. “Law and order” can have a racialized meaning, for example.

The term “dogwhistle” is even an example, in that we typically use it in reference to the right wing. However, white supremacy is now a dogwhistle itself. A leftist contingent is now charging any white person who seriously questions a position associated with people of color as a white supremacist. The idea is that if you go against a certain orthodoxy, then it isn’t only that you disagree, but that you also wish white people were still in charge, that you want people of color to sit down and shut up.

This is hasty and unfair. David Duke is, indeed, a white supremacist. The alt-right is, indeed, white supremacist. For one, they openly say so. Are there some whites who are more codedly white supremacist, even if they don’t quite know it? One assumes so—but the rhetorical brush is being applied much too broadly. After all, if whites accept anything a person of color states, is this not a new form of condescension? These days, the term “white supremacy” is being used not as an argument but as a weapon.

“White supremacist” is a new way of saying “racist” while stepping around the steadily increasing awareness that that word, too, is being wielded in sloppy ways. Writing “white supremacist” is a way of making the reader jump, in the way that “prejudiced” and “racist” once were. What handier way of driving your critique home than implying that your target would have broken bread with the Confederacy, stood at the school doors at the behest of Orville Faubus, or today would be happy to sip coffee at conferences with well-spoken alt-righters?

Of course, no one means precisely that—but educated people cannot lecture the world on how words must be used carefully, that we must understand words’ larger resonances, while casually throwing around a term that calls to mind black men hanging from trees. Never mind that it’s mean.

More to the point, the left sinks to the level of the right with its own dogwhistles, intolerance and exaggerations. This is not a call for the left to suppress their anger or lie down with the right as the lamb to their lion. Criticism is vital, and not always in emotionless tones. However, we must avoid the mores of the sandbox. Nietzsche’s point, that too often punishment is rooted in a desire for revenge rather than correction, is relevant.

If you make a claim that someone desires that white people be in charge and muzzle the opinions and opportunities of people of color, you should be able to prove it. No, the fact that psychological tests reveal subtle racial biases in whites does not justify calling any white person’s questioning of the views of a person of color a white supremacist. That’s an athletic jump from the subtle to the stark, from the subliminal to the egregious.

It is tragic how ordinary that jump is becoming—it isn’t only the famous being paintballed this way. My Columbia colleague Mark Lilla has presented an argument that the extremes of identity politics should be pruned in favor of a class-based politics in order to further the goals of liberals and the left. Katherine Franke of the Columbia University law school has tarred him for this as, well, you can guess. This is the quintessence of linguistic violence.

To use “white supremacy” as a battering ram is, in the end, as uncivilized as anything offensive to liberals scrawled on a wall or spewed into a comments section. Criticism? Of course. Recreational abuse? One is to rise above it. 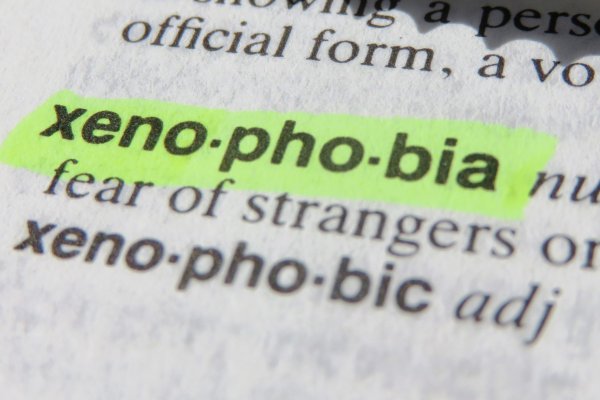 Dictionary.com's 2016 Word of the Year Is Xenophobia
Next Up: Editor's Pick